May 23, 2013: What Happens When You are on a Bridge When it Collapses? (10 More Famous Bridge Disasters) On May 23, 2013, the Interstate-5 bridge over the Skagit River collapsed suddenly, dumping 2 occupied cars into the river. Incredibly, not only did the occupants survive, they did not suffer any severe injuries. Often the results are much different and much more tragic. Today we discuss some of the famous bridge collapses through History, with an eye toward ones that are particularly deadly, interesting, or unique.  (See our previous article on August 1, 2007, “10 Famous Bridge Collapses.”) 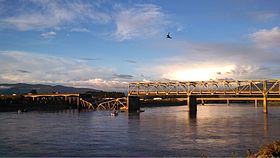 As stated above, this harrowing incident that dumped 2 cars carrying 3 people into the drink did not result in fatalities, a rare lucky break for such victims. This Mt. Vernon, Washington bridge collapsed when an oversized truck hit the overhead support beams causing rapid failure of one of the spans. Built in 1955, the bridge was considered “obsolete” though it was deemed safe. This incident is not the only I-5 bridge collapse, as the Coalinga, California highway bridge over the Arroyo Pasajero collapsed in 1995 when heavy rains brought tons of rushing water that undermined the bridge supports, collapsing 2 spans and killing 7 people.

Also known as the Eitai-bashi, this wooden bridge over the Sumida River in Edo (now Tokyo) failed due to being overloaded by throngs of festival goers. One of the deadliest bridge disasters in history, the failure and collapse resulted in between 500 and 1500 deaths.

The Dry Creek Bridge disaster claims top spot for the deadliest bridge disaster in United States History, with 111 people killed when a flash flood hit the railway bridge outside of Pueblo, Colorado, instantly washing the front half of the train off the bridge. Fourteen of the victims were never found. The engineer had slowed the train to about 15 mph in response to thunderstorm/washout warnings when the wall of water hit the train as it crossed a normally dry arroyo. Further death was avoided when brakemen on Pullman cars pulled the brakes, preventing even more cars from washing off the bridge. One car dangled 4 feet over the edge, terrifyingly close to killing those aboard. The locomotive was found in the mud next to the bridge, but the “chair car” was found a mile downstream, while a baggage car and a smoking car ended up 4 miles downstream. One of the victims was found 22 miles away! Within 24 hours the damaged bridge was rebuilt and again carrying train traffic.

This is the case of a fictional bridge featured in a novel and a 1957 World War II movie starring William Holden and Alec Guinness that won 7 Oscars (Academy Awards). Despite its fictional nature, this bridge being destroyed by the Allied prisoners of war that built it as slave labor for the Japanese Army is probably the most famous bridge destruction in history. The film depicts horrid conditions for and treatment of the prisoners, but the reality was even worse! The Japanese used Allied POW’s as slave labor and did not hesitate to torture or kill those that did not work satisfactorily. The real life Burma Railway Bridge on the River Kwai was a modern looking steel bridge, not the home-made looking wooden contraption shown in the movie.

As with the Angers Bridge Disaster of 1850, the failure of the Broughton Suspension Bridge was caused by soldiers marching across the span “in step,” the harmonic rhythm of their footfalls causing an iron support of the chain suspension to crash down, taking the bridge and the soldiers with it. At least this time 20 soldiers were injured but none died (unlike Angers where over 200 died). This incident caused a British Army order for soldiers to “break step” and march out of time when crossing bridges. This practice (which the USMC calls “rout step”) was followed when the author served in the US Marine Corps.

During the Napoleonic Wars the French had invaded the Iberian Peninsula, often leaving a reputation for savagery (on both sides of the fight) in their wake. When French troops with fixed bayonets advanced on a large crowd of Portuguese soldiers and citizens those Portuguese chose to flee in the face of slaughter. Unfortunately, the route of their retreat took them across a bridge over a river that Portuguese soldiers who had already crossed the bridge had begun to sabotage. Meanwhile, Portuguese artillery had begun firing at the French who were close on the heels of the fleeing Portuguese on the far side of the bridge, accidentally hitting the bridge with artillery fire. The mass of people, many of which were civilians, combined with the sabotage measures and artillery spelled doom for about 4000 people that died when the crowded bridge collapsed. 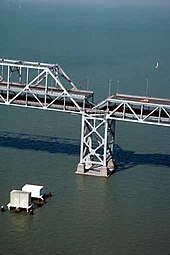 When you think of places not to be during an earthquake, bridges should rank high on your list (along with high rise buildings, elevators, amusement park rides and various towers). When an earthquake (Loma Prieta Quake) hit the San Francisco area in 1989, one of the structures that failed was the Interstate-80 bridge over the Bay, although fortunately only 1 person died in the collapse. On that same day (October 17, 1989), the same earthquake took down the upper deck of the Cypress Street Viaduct carrying Interstate-880 (known as The Nimitz Freeway) which crashed down on the lower deck, killing 42 people. 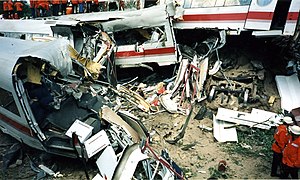 People are always inventing new ways to die and cause disaster, and this incident was unique in that it was caused by a speeding train that derailed, killing 101 people and injuring another 88 in the worst high speed rail accident to date. The train was zipping along at about 125 mph when a steel “tire” came off a wheel and through the floor of a passenger car. A passenger immediately notified a conductor, but the train continued until the damage caused a derailment in Lower Saxony not far from Hanover. The conductor refused to pull the emergency brake and instead decided to “further investigate” causing several cars to derail and slam into an automotive roadway over pass, destroying the car bridge.

This incident presented another novel way to render a bridge unusable, when a tanker truck overturned while travelling on the GA-400 state route and burst into flames. Unfortunately, the fire occurred right under the I-285 overpass, engulfing the span in flames and softening the steel members of the bridge with the high temperature flames. Luckily no one was killed and there was only 1 injury. Repairs were addressed quickly and the bridge was reopened for traffic only 4 weeks later.

In the news just recently on March 15, 2018, the collapse of a footbridge can usually be expected to result in death or injury to pedestrian traffic on the bridge. Not this time! This time the new bridge was not even open to foot traffic yet and was in the stage where the tension on supporting post rods was being adjusted. Meanwhile, the road under the bridge had just been opened to traffic, so when the 950 ton section of bridge collapsed cars waiting for a red light underneath the structure were crushed, resulting in 6 deaths and 9 injuries. The 320 foot long pedestrian bridge was to carry foot traffic over a roadway and a canal that alongside the road. The roadway under the bridge, The Tamiami Trail, was a considerable obstacle for pedestrians, with 6 lanes of traffic and 2 turn lanes. Sadly, an engineer had reported cracks in the bridge supports 2 days before the collapse, but the damage was considered minor and not prohibitively dangerous. A report of the cracks was forwarded to the Florida Department of Transportation, but the intended recipient of the message was out of work for several days and did not get the information until after the collapse. Ironically, a meeting of engineers was being held to discuss repairing the cracks and concluded no immediate danger existed only a couple hours before the disaster happened!

Question for students (and subscribers): What incidents would you add to the list?  Please let us know in the comments section below this article.

The featured image in this article, a photograph by Martha T of the I-5 Bridge over the Skagit River collapsed after a truck hit the trusses, is licensed under the Creative Commons Attribution 2.0 Generic license.  This image was originally posted to Flickr by roswellsgirl at https://www.flickr.com/photos/46248775@N00/8809912944. It was reviewed on 25 May 2013 by FlickreviewR and was confirmed to be licensed under the terms of the cc-by-2.0.