On April 12, 1831, 74 British soldiers got the surprise of their lives when the “new fangled” suspension bridge they were marching across collapsed!

The bridge at Broughton, near Manchester, England, was built in 1826 in the new “suspension” style. Being one of Europe’s first suspension bridges and only 5 years old, it was considered state of the art.

As the British troops marched “in time” in 4 columns across the bridge their synchronized footsteps began a rhythmic resonance creating a pleasant sort of bounce, causing some of the men to start whistling in time!  Unfortunately, the troops did not realize that the bouncing resonance created more and more up and down movement of the bridge until the structure started breaking up and collapsed, taking the soldiers with it!

Luckily for those troops, the river was only a couple feet deep, and although many men were injured, some with broken bones, nobody drowned or died of their injuries.

Obviously, a lesson was learned and afterwards British soldiers would march in “break step” not in time with each other.  US military veterans will recognize this as being ordered to “Route step, March!” upon approaching a bridge and not resuming marching to cadence until the bridge is crossed. 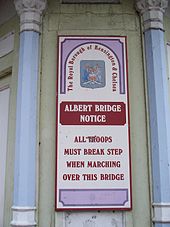 In 2004 the television show, Mythbusters, examined the resonance from marching causing bridge collapse theory with an elaborate set up, including building a bridge for testing and using 12 robot-soldiers with pneumatic “feet” to “walk” across the bridge in unison. After a test where the footfalls were too hard, and another where the footfalls were too soft, they got it just right and determined that the phenomenon is definitely true.  Unfortunately, this experiment was edited from the episode and only appeared in Mythbusters Outtakes.

Although not caused by troops marching, the Tacoma Narrows Bridge in Washington collapsed in 1940 from harmonic resonance caused by winds, basically the same effect. Perhaps you have seen the famous film of “Galloping Gertie” collapsing!  Although “Gertie” is another story to be discussed in more depth at a different date, you should know The Tacoma Narrows bridge was the third longest bridge in the world at the time of its collapse, and it lasted less than 4 months!

Question for students (and subscribers): Have you ever been on a bridge when it collapsed?  Please let us know in the comments section below this article.

For more on the history of suspension bridges, please see…