On Saturday, May 13, 2017, the Ultimate Fighting Championship event they call UFC 211 (the 211th such event) took place in Dallas, Texas, and featured 2 major championship/title fights, for the men’s Heavyweight (265 pounds) Title and women’s Strawweight (115 pounds) Title.

In both fights the reigning champions won and retained their titles in convincing fashion.  For the men, Heavyweight Champion Stipe Miocic of suburban Cleveland, Ohio pounded arch rival Junior dos Santos of Brazil into the mat, winning by knockout in the first round.  Dos Santos had previously beaten Miocic in December of 2014, the last time Miocic lost a fight, and only the second loss for the Champion who boasts a record of 17-2.  Miocic tied the UFC record by having 2 successful defenses of his Heavyweight Championship title, and can become the most successful Heavyweight Champ in UFC history with just one more title defense.  Miocic is a popular Champion, never testing positive for any illegal or performance enhancing drugs and leading a stellar life as a citizen, working as a firefighter and EMT.

Women’s Strawweight Champion Joanna Jedrzejczyk of Poland has been frighteningly efficient in the Octagon, with a perfect record of 14 wins in 14 fights.  UFC Strawweight Champion since March 2015, Joanna already has 5 successful championship defenses.  With an extensive background in Muay Thai and Kickboxing prior to entering the realm of Mixed Martial Arts in the UFC, Joanna was a 4 time World Kickboxing Champion and 6 time World Muay Thai champion (both in various sanctioning bodies).  For the Championship fight in UFC 211, Joanna fought an up and coming challenger from Brazil, Jessica Andrade, 4 years younger (25 vs. 29) than Joanna and sporting an incredibly muscled physique and prodigious strength.  Joanna fought a technical masterpiece of a fight, beating Jessica in a unanimous decision, winning all 5 rounds along the way, and out striking Andrade 230 to 94. 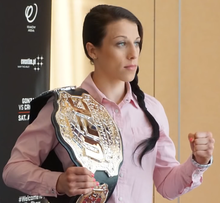 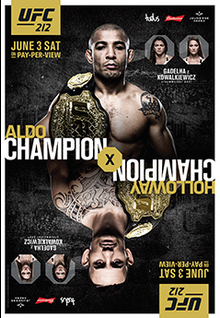 Question for students (and subscribers): Who is your favorite UFC champion?  Please let us know in the comments section below this article.