Werdum was defending his title for the first time and seemed over confident at the start of the fight, charging at Miocic and running into a short right that put the muscular Brazilian on the canvas, ending the fight when the referee quickly saw that Werdum was defenseless. 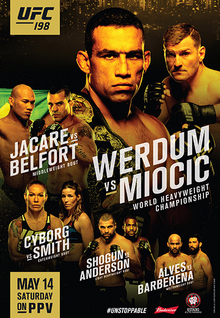 The ecstatic 33 year old Miocic, hailing from a lifelong residence in the immediate area of Cleveland, Ohio proudly announced to the crowd and the television audience that the “Cleveland Curse” of not having a major champion (since 1964) was now over.

Born of Croatian immigrants, the clean cut and wholesome Miocic works as a firefighter and paramedic in suburban Oakwood Village and Valley View.  The 6’4” 241 pound Miocic is a lean heavyweight and played college baseball well enough (at the University of Alberta, Canada and Cleveland State University) to have major league interest in him.  His other college sports were (not surprisingly) wrestling and football. 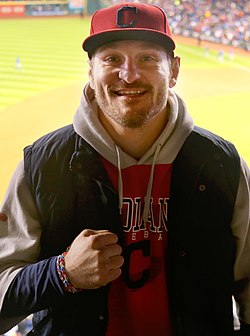 An avid fan of Cleveland sports teams, Miocic was honored immediately after his victory on Twitter by the Browns and Indians.  Miocic also encouraged the Cavaliers to do their part and win the NBA championship, a realistic possibility this year.

With a professional MMA record of 15-2, Stipe’s only losses came at the hands of top notch heavyweights Junior dos Santos (former UFC champ) and Stefan Struve (7 feet tall and known as “Skyscraper”).   A member of Strong Style Fight Team, Miocic looks to successfully defend his title more than once, a true rarity in the volatile UFC Heavyweight Division.

Question for students (and subscribers): Who is your favorite UFC heavyweight champion?  Please let us know in the comments section below this article.