Monday, August 10
Trending
You are at:Home»Society»Crime»May 12, 2006: Please, Not Another Dumb Riot! (The Iranian Cockroach Cartoon Riots)

On May 12, 2006, an Iranian magazine ran a cartoon of a cockroach sitting across a table from and having a conversation with an Iranian boy.  Incredibly (to us), this cartoon led to massive riots across Iran, a country that experienced a profound revolution in 1979, when it transformed from a monarchy to a theocracy, becoming an Islamic state.  We have often told you about goofy riots, riots that have either idiotic origins or at least have goofy names.  History is full of such unfortunate events, and today, we add yet another such unfortunate riot to this Riot Hall of Shame.

The Iranian “holiday” magazine, Iran-e-jomee, issue of May 12, 2006, featured a cartoon of a boy having a conversation with a cockroach, with a not-surprising language barrier preventing proper conversation.  The boy attempts to communicate with the cockroach in “cockroach language,” and at one point in the conversation the boy says, in response to something unintelligible by the cockroach, “Namana?” a word that means “What?” in the Azerbaijani language.  If you think “Snowflake” people that are too easily offended are merely a modern American phenomenon, apparently Iranian Azerbaijanis can give any American Snowflake a run for their money when it comes to feeling highly insulted over a trivial matter!  The perceived insult to Iranian Azerbaijanis resulted in widespread unrest and ultimately in rioting across Iran by Azerbaijani speaking minorities against the Persian/Farsi speaking majority.  Thousands were arrested, and perhaps dozens were killed as police fought to quell the riots.  (Official Iranian government reports claimed 330 arrests and 4 rioters killed, certainly a lie.) 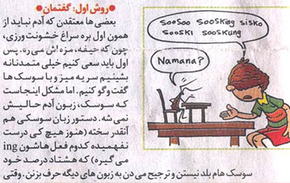 Cartoon that started the controversy.  The boy tries to address the cockroach using different forms of soosk (Persian word for cockroach) and in one of the cartoons it answers, “Namana?” (Azerbaijani language for “What?”).  Published in the newspaper Iran on May 19, 2006 and painted by Mana Neyestani.

The cartoon at the core of the protests/riots was called “How to Stop the Cockroaches from Making Us into Cockroaches?”  Targeted at a child audience and intended to be a satirical piece (Wha?), the cartoon depicted 9 methods of dealing with cockroaches, namely “dialogue, oppression, elimination, population control, and violence.”  In the section dealing with dialog, the text includes the “fact” that cockroaches do not understand “human language,” and advises that the human must try to converse in “cockroach language,” but goes on to lament that the cockroaches are not even fluent in their own language!  The futility of communicating in a “civilized” manner with cockroaches means violence is the next logical step, inevitable and necessary.

The real allegory was supposed to be the discussions between Iran and Western nations, but Iranians that speak Azerbaijani took the cartoon to be an insult to those Iranians in the minority.  A previous Iranian President had advocated for “dialogue between civilizations” and met with opposition from many Iranian elites that decried the lack of decent dialog among Iranians of different political opinions, let alone between Iran and other countries.  The cartoonist and his editor were both among those arrested.

The reaction to the subject cartoon was widespread protests and demonstrations, which were met with violent response by Iranian police, resulting in violent action by the protesters, turning the protests into riots.  Of course, the government of Iran blamed the US and Israel, among other outsiders, for instigating the riots!  The allegations contained elements of the CIA working out of Azerbaijan and in conjunction with the Azerbaijanis to cause parts Iran to secede and be annexed by Azerbaijan.  No convincing evidence of such a plot has ever been revealed by Iran.  Just too predictable…

Question for students (and subscribers): Do you believe the United States instigated the Cartoon Riots?  Please let us know in the comments section below this article.

The cockroach also spoke in Persian.  Published in the newspaper Iran on May 19, 2006 and painted by Mana Neyestani.

Mirvahedi, Seyed. The Sociolinguistics of Iran’s Languages at Home and Abroad: The Case of Persian, Azerbaijani, and Kurdish. Palgrave Macmillan, 2019.

Shaffer, Brenda. Borders and Brethren: Iran and the Challenge of Azerbaijani Identity. The MIT Press, 2002.

The featured image in this article, a photograph of Madagascar hissing roaches having a stroll on Husond‘s hand, is licensed under the Creative Commons Attribution-Share Alike 3.0 Unported license.  The original uploader was Husond at English Wikipedia.