On June 3, 1943, US Navy sailors and US Marines tangled with Latino young men in what is known as The Zoot Suit Riots. Earlier this web site discussed the Brown Dog Riot and the Egg Nog Riot, which just goes to show you that people will riot about almost anything. (We will ignore the typical riots, such as race based, all but one sporting event based, and starving peasants.) Here we list 10 of the goofiest named riots in history. 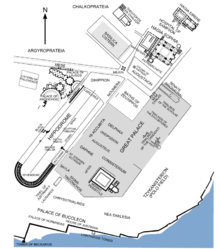 Why is this incident the only sporting event riot on the list? Because 30,000 people got killed at the local chariot races. It seems back in the day the fans of various chariot teams were more than just fans, more like a fan club, political party, and gang rolled into one. It seems 2 of their members were in jail for murder and the “Blue” and “Green” teams wanted them freed. With the Imperial Palace located right next to the Hippodrome, the rioters did not have far to go to attack the emperor. The clever emperor bribed the “Blues” to leave, and then had the “Greens” slaughtered. This event was the worst riot in history.

Angry citizens of Sheffield were enraged by rumors that the pastor and sexton had been selling bodies meant for burial to medical schools for dissection. Turns out the rumors were false, but the 2 churchmen were found guilty of reusing graves to save space in the cemetery. A memorial to disinterred bodies can be found there today.

A lot of riots seem to have been sparked by alcohol related issues, including The London Gin Riot of 1743, The Bavarian Beer Riot of 1844, The Whiskey Rebellion of 1794, The Portland Rum Riot of 1855, The Lager Beer Riot of 1855, The Champagne Riot of 1911 and of course, the most recent, Tampa Cigar and Brewing Company Riot of 2014 (the company had the audacity to run out of beer at an event they were hosting).

Also known as The Great Police Riot (presumably to separate it from all the not so great police riots), the combatants were the New York Metropolitan Police versus the recently disbanded New York Municipal Police. Rampant police and city hall corruption had resulted in the state government mandating the change in police, which eventually resulted in a battle at city hall when the Metropolitans tried to arrest the mayor. The mayor finally agreed to be arrested, ending the riot, but he was never tried for any crime. The Municipals, who had supported the mayor, were then disbanded in fact as well as decree when the mayor removed his support. This was one riot you really could blame on the police!

Calling a riot “evil” is kind of redundant, but Londoners did it anyway. Fired up by a local Dr. Bell, the mob was instructed to rise up and attack all foreigners in London on May Day (May 1st). They did, and the mob freed some prisoners that were held for previous attacks on foreigners. Although 300 rioters that were arrested were pardoned, 13 of their company were executed for treason, as was John Lincoln, a broker that had put up Dr. Bell to make his speech calling for violence. 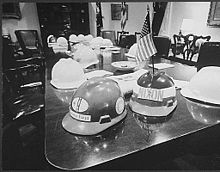 When about a thousand college and high school students were protesting the Kent State shootings (“Four Dead in Ohio”) and the Viet Nam War in general, 200 construction workers had had enough! Enraged at what they thought were unpatriotic actions by the protesters, the “hard hats” attacked and the brawl lasted 2 hours. Six people were arrested and about 70 were injured. The construction workers were carrying signs that read “America, love it or leave it” and American flags. City hall was stormed. Mayor Lindsay blamed the police, and of course the police blamed the mayor. President Nixon tried to appeal to both sides, presenting himself as a force for peace while still being anti-communist.

Not to be confused with the Polyester or Rayon Riots (okay, you are right, we made those up), the Nylon Riots were due to the resumption of nylon stocking manufacture after 6 years of all nylon production being used for military purposes (mostly parachutes). After the war, ladies flocked to stores to buy the stocks of nylon stockings as soon as a shipment reached the store, usually with more ladies than there were pairs of nylons to sell, resulting in riots. (Seriously, would men riot over a shortage of underwear?) 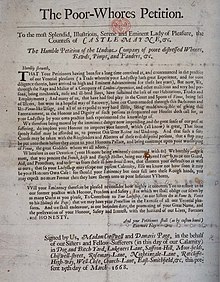 Puritanical anti-royalists attacked brothels in London to protest the alleged immoral conduct of the king (Charles II) who was known to take lovers from the ranks of palace courtesans. Apparently the king and royalists were not amused, and had 9 conspirators executed.

In addition to the usual racial animosity between white servicemen and Latino men, the garish clothing (“Zoot Suits”) worn by the Latinos made them stand out in a crowd. The servicemen thought many of the Latinos were healthy and old enough to serve in the military and attacked them for being “unpatriotic.” A year later (1944) Montreal, Quebec had its own “Zoot Suit” Riot. 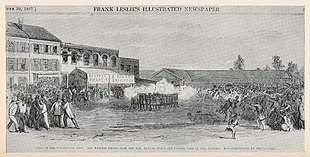 Considering that the Plug Uglies, the Rip Raps, and the Shiffler Fire Company were all a part of this riot, it is no surprise they were part of the Know Nothing movement. The outsiders from Baltimore and Philadelphia came to Washington to disrupt voting. These so called Know Nothings were protestant Americans that were anti-immigrant and anti-Catholic. President Buchanan called in the Marines and 10 rioters were killed, earning him criticism for using military troops against rioters.

Question for students (and subscribers): Do you have any nominees for a sequel list?  If so, please let us know in the comments section below this article.

Badiou, Alain and Gregory Elliott.  The Rebirth of History: Times of Riots and Uprisings.  Verso, 2012.

The featured image in this article, a photograph taken by John Ferrell and first published in June, 1942 of a Washington, D.C. soldier inspecting a couple of “zoot suits” at the Uline Arena during Woody Herman’s Orchestra engagement there, is available from the United States Library of Congress‘s Prints and Photographs division under the digital ID fsa.8b14443.  This image is a work of an employee of the United States Farm Security Administration or Office of War Information domestic photographic units, taken as part of that person’s official duties. As a work of the U.S. federal government, the image is in the public domain in the United States. See Copyright.