Tuesday, August 4
Trending
You are at:Home»June»June 29»June 29,1974: Who Was the First Woman President in the World?

On June 29, 1974, we mark the first time in World History that a woman became President of any country in the world. Sure, there have been Queens and Prime Ministers, but Isabel Peron, the third wife of former President of Argentina Juan Peron, is the first lady to have the title “President” of any country, in this case, Argentina. On top of the distinction of achieving a “first” for women, Isabel was only 33 years old when she was sworn in as president, too young to even run for president in the United States.

Born in La Rioja, Argentina in 1931, Isabel is now 87 years old. Sent to exile in Spain in 1981, Peron had a close call with legal authorities over crimes alleged to have been committed by her government while she was in office, with demands in 2006 for her to answer for the disappearance of her political enemies and her 1975 edict to the armed forces of Argentina to “annihilate subversive elements.” This threat from Argentine courts came in spite of Peron having been issued a pardon in 1983 for any alleged corruption committed while president. She was arrested in Spain to answer to these charges. In 2017, all charges and allegations were formally dropped by the Argentine Supreme Court. (Crimes allegedly ordered by Peron and her husband, former President Juan Peron who died in 1974 include the disappearance of at least 600 political opponents and the assassination of another 500 people.

Isabel met her future husband, then ex-President of Argentina Juan Peron, while Juan was in Panama in exile. His second wife, Eva (famous as the “Evita” of musical theater) had died in 1952 and Juan had been a widower for several years. Isabel married Juan in 1961, 35 years younger than her new husband. Juan Peron had been maneuvering politically while in exile and orchestrated a proxy to run for the presidency of Argentina and win, allowing Juan Peron to return to his country and run for President himself in 1973. Peron was reelected with Isabel as his Vice President, but in 1974 Juan suffered debilitating heart attacks, leading to the swearing in of Isabel as President. Juan died a couple days after Isabel was sworn in. 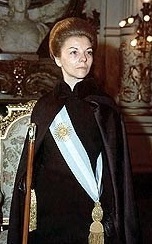 While Juan and then Isabel was President of Argentina, Isabel was swayed by the occult, and was subject to the astrological readings of a former police officer, Jose Rega. (Remember Nancy Reagan relying on astrological divinations to advise President Reagan? How about Adolf Hitler and his belief in the occult?) Isabel formed a unit called Argentine Anticommunist Alliance (Triple A), a glorified name for a hit squad of assassins to kill political rivals of the Perons. When Juan Peron died and Isabel assumed power, she ruthlessly crushed any opposition. Aside from her brutal political tactics, her reliance on Jose Rega caused unrest in the public. Rega had become an important advisor to the point where he himself wielded considerable power. Meanwhile, the left wing of Argentinian politics was also engaging in brutal and deadly political crimes, virtually acts of terror. Murders and kidnappings by the Right Wing government were matched by the same behavior by the Left Wing opposition. By the middle of 1975 the economy and society in Argentina was falling apart. Rega was sent to Spain as “ambassador,” really a form of exile to get him out of the country. As impeachment proceedings began in 1976 and virtual civil war was wreaking havoc on the population, Isabel took a helicopter to the airport in a probable attempt to get out while she could. Isabel Peron was arrested at the airport in Buenos Aires and was placed under house arrest. While many Peronists were rounded up and “disappeared,” Isabel was moved from location to location over the next 5 years, but neither tried nor actually jailed. In 1981 she was sent into exile in Spain.

Isabel Peron made history as the first woman to hold the presidency of any country on Earth, although her tenure was marked by questionable decisions and internal strife. It would be nearly impossible to call her presidency a success. Other women to lead countries have encountered considerably greater success, including several Queens of England, Catherine the Great of Russia, Golda Meir of Israel, Indira Gandhi of India, Margaret Thatcher of the United Kingdom, and currently Angela Merkel of Germany. During the 2016 United States Presidential campaign it seemed as though the US would elect the first woman as President, but Hillary Clinton got about 80,000 votes less than she needed to win. 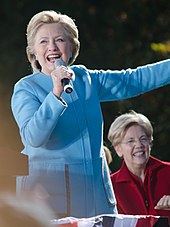 Question for students (and subscribers): When do you predict a woman will be elected President of the United States? Do you have any predictions as to whom that historic woman will be? Give us your thoughts on the subject of women as presidents and leaders of countries in the comments section below this article.