On June 25, 1976, the Governor of Missouri, Christopher Bond,  signed an executive order rescinding Executive Order 44, better known as “The Extermination Order.”  Executive Order 44 had been issued by then Governor Lilburn Boggs (“Lilburn”???) ordering that a force of 400 mounted men be raised to “exterminate or be driven from the state” all Mormons (Latter Day Saints).

Governor Boggs (and many other Missourians) believed the Mormon religion and practices to be an abomination and them to be in open defiance of state laws.  He further ordered the amount of men detailed to exterminate the Mormons could be increased if necessary. 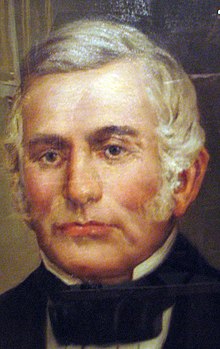 The Mormons had been expelled from Jackson County in 1833 and then confined to Caldwell County.  Friction between Mormons and their neighbors largely centered on the Mormon belief that slavery should be abolished.  Slave owning Missourians would hear none of that!

This mentality resulted in conflict known as The 1838 Mormon War, which resulted in the expulsion of Mormons from Missouri.

Mormon leader Sidney Rigdon had delivered a July 4th speech in which he made it clear any attacks on the Mormons would be met with force.  Rigdon inflamed tensions by stating that the Mormons, if attacked by non-Mormons, would “carry the seat of war to their own houses and families.“  The ensuing skirmishes resulted in the Executive Order and ultimately the exodus of the Mormons.

About 10,000 Mormons had been evicted from the state, mostly at gunpoint.  In 1976, Governor Bond finally rescinded the onerous Executive Order, recognizing the injustice and hardships imposed by it.  The Church of Latter Day Saints accepted the apology and invited Bond to their annual conference.

People and their political divisions have discriminated against and persecuted various religious groups throughout the world and throughout history, but in the United States where religious freedom is one of the founding tenets of the country it is especially ridiculous and sickening.  Almost every religious group has been persecuted sometime and somewhere, which makes their willingness to do the same to other groups all the more baffling.  Question for students (and subscribers): Why did it take so long for the Extermination Order to be rescinded?  If you know, let us know, too, in the comments section below this article.