On June 24, 109 AD, Roman Emperor Trajan opened the aqueduct known as Aqua Traiana, bringing water to Rome from Lake Bracciano 25 miles away.  The ancient Romans are known for their architectural achievements, but other societies also built some pretty impressive projects as well.  Here we list 10 impressive examples of ancient architecture, not necessarily the most famous, but ones we hope you will like.

Along the Mississippi Valley to the Ohio Valley, Native American civilizations built a series of earthen mounds of large proportions for apparently religious purposes.  Built from a height of only a few feet to as much as 100 feet tall, moving that much dirt to construct these mounds surprised researches that had previously believed the older civilizations (perhaps as far back a 6000 BC) did not have the organizational structure to cooperate in such ventures.  The shapes of the mounds range from round, pyramid type with a flat top, or snake like.

The Romans were an enterprising lot, and building was certainly one of their strong suits.  They built at least 11 such structures to serve the city of Rome by around 200 AD, and took their technology throughout their empire, especially in Europe where many more aqueducts were constructed.  Some of these graceful structures are still in partial use today, and some have been modified as bridges at times.  To complement the aqueducts that brought clean water to Romans, the Romans also constructed elaborate sewers to carry away rainwater and waste.

Evidence exists that Native Americans were building canals in North, Central and South America as long as 7000 years ago in Florida and Louisiana, and 5400 years ago in Peru.  The Earth was still warming after the ice age, and sea levels have risen at least 5 feet since then, covering much of the evidence from the European settlers that came to the Americas after 1500.  Some of these canals (and harbors) were a mile to a dozen or more miles in length.  Ancient Arizona had a canal and irrigation network of over 1000 miles of waterways from as far back as 1300 BC.

The earliest stone arch open spandrel bridge in the world, it is the oldest bridge in China.  At 167 feet long and 31 feet wide, this remarkable and beautiful bridge has lasted through major floods and earthquakes that modern bridges might not survive.  Modern engineers have tested the capacity of this bridge and found it to be about 8 tons, far more than it would have had to carry when built.

Made by the Mayan and Aztec civilizations (and a couple of others), these Native Americans built some of the biggest pyramids in the world without the benefit of metal tools.  Spread throughout Mexico and Central America, the dozens of examples include the Great Pyramid of Cholula located in Mexico, the largest pyramid in the world by volume.  (Cholula= 4.45 million cubic meters, Great Pyramid of Giza, Egypt= 2.5 million cubic meters.)   The base of Cholula is 450 meters on each side with a height of 66 meters.  The Great Pyramid at Cholula was built starting about 300 BC and added on until about 900 AD.

The original taxpayer funded municipal stadium, the Colosseum could hold somewhere between 50,000 and 80,000 spectators, a size that seems to still be relevant today.  Whether gladiators in combat, dramatic plays, or any of a number of public spectacles, the Colosseum was the place to see what was happening in Rome. By the time the Roman empire started crumbling (5th Century AD) so did the Colosseum.  Still used for shops and workshops, it fell into disrepair and many of the finer stone blocks were taken for other projects.  The massive structure is still imposing to this day, and remains perhaps the number one tourist attraction in Rome.  Built without electric, gas, or steam power, the building covers 6 acres with an outer wall 157 feet tall.  That outer wall took an estimated 100,000 cubic meters of stone, cut and laid without mortar to build.  (Due to space considerations, we strongly encourage our readers to read more about this fantastic stadium in other sources.) 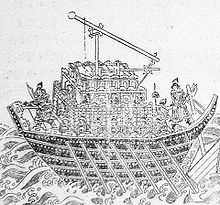 Also known as “castle ships” or “tower ships” the Louchuan were gigantic for their day, 200 feet long and 100 feet tall (not counting masts).  Used as floating fortresses, these ships were not maneuverable, but were used as headquarters or flagship type vessels.  Often luxurious, they had several deck levels above the main deck, sometimes containing over 100 luxurious palace like rooms per deck.  The top deck was spacious enough for horses and vehicles to move about.  Spears and arrows would defend the ship from close attack, and catapult or trebuchet type weapons would provide long range firepower.  Although continued to be built after the Han Dynasty, it was then that the Louchuan came into their own.

A fortress made of giant stones on the Northwest side of the Acropolis, the citadel is so old and consists of such big stones the Ancient Greeks did not know who built it and therefore believed a race of giants had made the place.  The actual fortress was built by the  Mycenaean civilization, and the Lion Gate is the entrance to the fortress.  The lintel (stone above the entrance) is 15 feet long, 7 feet wide, and 3 feet high.  How people in the 13th Century BC managed to lift something that huge on top of 2 giant stone monoliths (pillars) 10 feet high is staggering to think about.  Standing at the site and looking at the giant stone walls commanding the hill is an awesome experience.

Also known as Via Appia, this road connects Rome to Brindisi, and was built originally for the purpose of moving large numbers of troops.  Stretching over 360 miles by 244 BC, the original span was 132 miles, rather long for a paved road in those days.  Built meticulously of graded dirt and gravel covered by stones and mortar, the road was crowned for water to run off and had drainage ditches on each side supported by retaining walls.  A 19 mile stretch across the Pontine Marshes was constructed as a causeway.  The straight, flat, smooth and durable road was a marvel in its day, earning it the name “The Queen of the Long Roads.”  Some original (or at least quite old) parts of the road remain today for you to marvel at.

1.  Great Wall of China, 7th Century BC to Present.

The main part of the Wall was built 220-206 BC, but much of that has been built over through the years.  Stretching almost 3900 miles, the wall is supported by natural obstacles and trenches adding up to a total barrier of 13,100 miles!  The Wall underwent massive reconstruction during the Ming Dynasty in the 15th and 16th Centuries AD, and little remains of the ancient structure.  Built to keep out the Mongols, ancient men built nothing like this anywhere else in the world (Hadrian’s Wall at 80 miles long not in the same league).  (Note:The story about it being visible from the moon or outer space is a myth.)

Scarre, Chris.  The Seventy Wonders of the Ancient World: The Great Monuments and How They Were Built.  Thames & Hudson, 1999.