On June 25, 1923, Lt. John Richter and Capt. Lowell Smith of the US Army performed the first aerial refueling of an airplane in flight in their DH-4B.  Here we list 10 groundbreaking (pun intended) aviation firsts, not necessarily the most important, but hopefully interesting ones.

Putting on an exhibition at the Tivoli Gardens in Paris, Blanchard was flying a Balloon and shooting fireworks, which predictably ignited the gas (hydrogen) in the balloon causing it to crash, killing Sophie.  Blanchard was also the first woman balloonist and was a favorite of Napoleon Bonaparte who named her “Aeronaut of the Festivals.”

In the first known incident of aircraft launched from a ship in order to bomb the enemy, the Austrian Navy launched several unmanned balloons from the warship, Vulcano, in an unsuccessful attempt to bomb Venice.

7.  Thaddeus Lowe, 1st Electronic Message From an Aircraft to the Ground, 1861.

Lowe was 500 feet above the National Mall in a balloon connected to the White House by telegraph wire when he sent a telegram to President Lincoln, the first time in history an aircraft had communicated electronically with the ground, demonstrating the usefulness of aerial reconnaissance in real time.  Balloons were then used by both sides during the Civil War, including the first instance of directing naval gunfire from the air.

These pioneering aeronautical engineers from England created and experimented with the first wind tunnel to study airflow over airfoils and other objects.  This quickly became an indispensable piece of equipment for aircraft designers.

Although powered and controlled flight had not yet happened at the same time, many researchers were coming tantalizingly close to achieving such manned flight by the late 1800’s.  Ader wrote in his book,L’Aviation Militaire, that a class of ships called aircraft carriers would be built with a long, wide, flat deck free of obstructions to allow airplanes to take off and land.  He wrote that such ships would have to have the speed of a cruiser (to facilitate take offs), a lower deck to store aircraft, and workshops to perform maintenance and repairs.  Could he read the future, or what?

This treaty convention laid the groundwork for international laws of war, and for the first time included rules governing the use of aircraft.  It prohibited the launching of bullets and bombs from aircraft, but permitted aircraft to be used for reconnaissance.  Most major nations in the world participated. 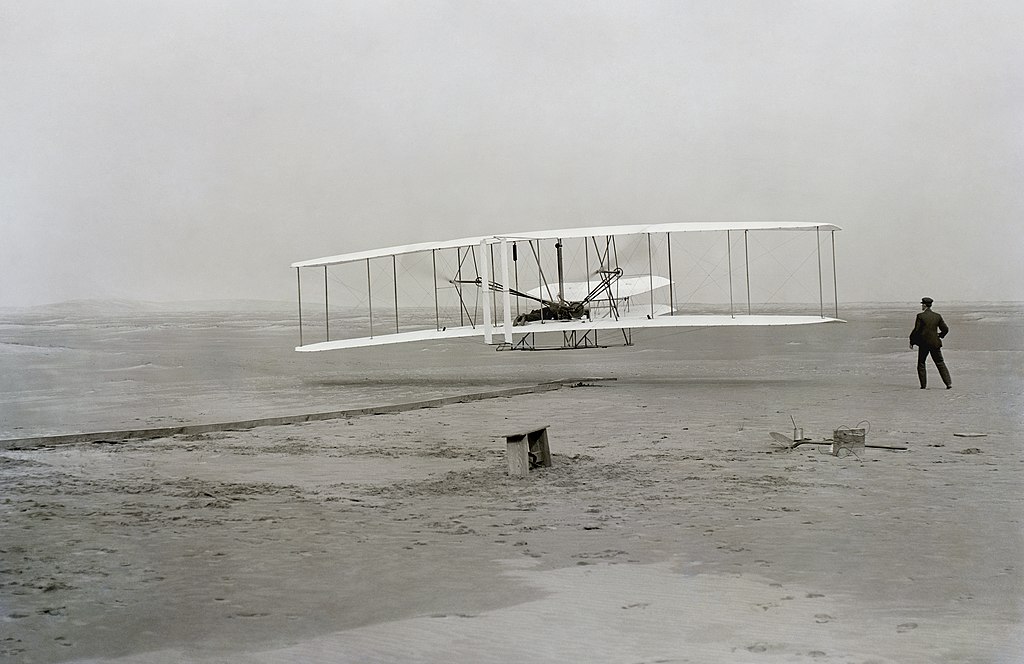 Now you are back on familiar territory!  The 4 flights conducted on that first true day of powered aviation was also the first time a manned, powered flight had been photographed, a bonus first!

The Wright Brothers established an 84 acre cow pasture as their airport, just outside of Dayton, Ohio, the first place dedicated to flying in the world.  It was there that they were the first aviators to make a controlled turn, a circle, a bank, and a figure eight.  Additionally, they established their flying school there (another first), which counted among their students future 5 star General Hap Arnold and the first man to fly coast to coast (1911), Calbraith Rodgers.  Of course, certain malcontents contest the claim of Huffman Prairie, but it seems legit to us.

As described above, the US Army managed the first crude aerial refueling, merely pouring fuel into the tanks from cans carried on the plane.  Lest you think this was merely a stunt, using the same Airco DH-4B aircraft type, 2 days later they performed the first air to air aerial refueling, and later that year kept a DH-4B aloft for 37 hours by using 2 other DB-4B’s as tankers, transferring almost 700 gallons of gas and 38 gallons of oil over 9 refuelings.

Question for students (and subscribers): Which ones would you add?  Please let us know in the comments section below this article.