Friday, June 5
Trending
You are at:Home»Society»Crime»Crime and the Law, Update for June 2018

On June 17, 2018, we take the opportunity to discuss some new developments regarding events that either happened this month or that reached the news in the past couple weeks. The worst incident to report was the death of 2 Kansas City, Kansas sheriff’s deputies at the hands of a career criminal and murderer. Other events include the ongoing Russia probe and the status of racial discrimination and sexual misconduct claims.  Today (June 17, 2018), a reported drunken driver in Washington (state) apparently used a pistol to make at least a few attempts at car jacking people on the road and at a Walmart parking lot.  The would be carjacker fired shots, which quickly alerted 3 citizens with concealed carry permits.  Those intrepid citizens responded with their own guns and shot and killed the bad guy, safely ending the dangerous situation.  The suspect had shot a driver twice in a carjacking attempt and a 16 year old girl suffered a minor wound.  Score one for legally armed citizens!

Starting with sexual misconduct, the latest men to be accused of impropriety in the “Me too” era include actor Sylvester Stallone and NFL football star Kellen Winslow, Jr. Stallone, now 71 years old, is accused of an incident 27 years ago in which he allegedly forced or coerced a 16 year old girl into having sex with him. Stallone denies the allegations and prosecutors are reviewing the complaint. Winslow is currently in a considerably worse situation, having been arrested for various counts of kidnapping, rape, burglary and other charges, 9 charges in all. Winslow was first arrested on June 7, 2018, on a burglary charge, and arrested again a week later for the other charges. Winslow was a Pro Bowl tight end in the NFL and had at one point been the highest paid tight end in the league. 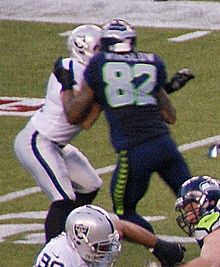 Kellen Winslow during his time with the Seattle Seahawks.

Meanwhile, popular television host Chris Hardwick (The Talking Dead) has also been accused of sexual assault by his ex-girlfriend. Hardwick denies the charges. Hardwick has been removed from his job as a moderator on multiple panels (AMC, BBC) at Comic-Con, and from his Nerdist website (that he co-founded). His accuser claims he “snapped and yelled at” her constantly.

A prisoner being taken to court in Kansas City, Kansas, overpowered at least one of the two deputies escorting the prisoners, taking the deputies gun and shooting both deputies. The career creep was also shot in the melee and is recovering in a hospital. Both deputies died from their wounds (a male and female). The scumbag that killed the deputies is Antoine Fielder, a career criminal that has a murder case pending in which he has already been tried twice, both trials ending in a hung jury amid allegations of witness intimidation. He is facing charges of another murder from a separate incident and is known to have bragged of 4 separate murders. Fielder has also had legal problems based on drug dealing. Both deputies were married and the parents of children.

Meanwhile, another sexual assault case is in the news, this time the alleged victim being the one accused! A 19 year old college coed accused a pair of Sacred Heart football players claiming they sexually assaulted her at a party in Connecticut in 2016, but later recanted and admitted the sex was consensual. She apparently made up the rape story to avoid turning off another romantic interest of hers. She is charged with witness tampering for lying about the incident and faces 5 years in jail. The falsely accused football players are reportedly contemplating a lawsuit against the liar.

In a bizarre case of revenge gone bad, a former girlfriend has been sued by her ex-boyfriend after she allegedly faked a rejection letter from Colburn Conservatory of Music (Los Angeles) even though the school had not only accepted him but also granted him a scholarship. The former girlfriend also turned down the scholarship on “behalf” of the man. He has won a judgement in Canadian court of $350,000 (Canadian), the equivalent of $265,000 US. CNN reports that the female perpetrator did not answer their calls for a comment.

In a major investigative study of the use of lethal force by American police officers, the study conducted by professors from Michigan State University and Arizona State University found that “When adjusting for crime, we find no systematic evidence of anti-Black disparities in fatal shootings, fatal shootings of unarmed citizens, or fatal shootings involving misidentification of harmless objects.” This exhaustive, independent study found no pattern of shooting unarmed Black men or Black men erroneously thought to be holding a weapon more than White people. Out of 144 factors tested for, only 1 was found to possibly show an anti-Black disparity. In fact, the study found the higher crime rate among the Black population accounts for a higher per capita rate of Blacks being shot by police. The Wall Street Journal found in 2016 that the rate of police use of lethal force against White people suspected of a violent felony was double that of Black suspects! Another study showed that police officers were 3 times LESS likely to use lethal force against unarmed Blacks than against unarmed Whites. A 2016 study by prestigious Harvard University found “There is no racial bias in police-involved shootings. Not only are blacks not more likely to be fired upon by police than whites in tense moments, the study found that, if anything, they are less likely to be shot at.” We do not believe these studies indicate there is no racism in the United States and certainly not that no racism exists within the police community, and these studies are not considering the frequency of which Black people are stopped by police or cited for minor infractions compared to White Americans, but the evidence is overwhelming that there is no epidemic of police wrongfully shooting Black Americans at a rate higher than White Americans. The opposite is true. That being said, we strongly believe every incident of the use of force by police should be investigated and wrongful use of force should be punished. Meanwhile, Americans should avoid being used as suckers by the Russian trolls that whip up racial tensions over the internet, a now well known fact. We should also be cautious about allowing ourselves to be manipulated by the media that frequently sensationalizes and misrepresents police use of force incidents. As always, we encourage activists, politicians, and reporters (or regular citizens) to attend any use of force training exercises that may be offered in their communities, even to the point of requesting such civilian participation from the local police authorities.

Finally, the latest turn in the Russia-Gate investigation is former Trump Campaign manager, Paul Manofort, being jailed in violation of the terms of his bail for alleged witness tampering.  (All other aspects of the ongoing “Mueller probe” are too convoluted for this small space!)

Question for students (and subscribers): As always, please feel free to comment on any of the law related topics discussed here or other incidents you deem worthy of comment in the comments section below this article.