On May 17, 1990, homosexual people around the world breathed a sigh of relief and vindication when the General Assembly of the World Health Organization ruled that homosexuality would no longer be considered a mental illness, paving the way for the culture shaking changes that have followed in the next 26 years.

One major change in American culture was marked when the first legal same sex marriages in the United States were performed on May 17, 2004 in Massachusetts.  The Netherlands had broken this taboo in 2001 and as of now a total of 15 countries allow same sex marriage in all or parts of their territory.  Notable countries on this list include Canada, Mexico, United Kingdom, Spain, France and South Africa (the only country in Africa on the list).  Many European and American (Central and South) countries seem ready to make same sex marriage legal, as well as Australia, as evidenced by increasing support among citizens polled. 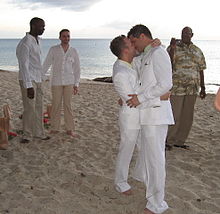 A same-sex wedding ceremony in June 2006

Notable countries not on the same sex marriage bandwagon include China, India, Russia, all Muslim majority countries, Germany and Italy (even though in Roman Empire times such unions were not unknown).  In fact, no Asian country allows same sex marriage, although Israel (yes, it is in Asia) recognizes those marriages performed in other countries.

Same sex marriage became the law of the land in the United States on June 26, 2015 when the US Supreme Court decided in Obergfell v. Hodges that the 14th Amendment (Equal Protection) prohibits states or local governments from enacting or enforcing laws or rules against same sex marriage.  This decision overturned previous decisions and negated any attempts by anti-gay legislators in Congress (House or Senate) from passing any sort of “Protection of Marriage” anti-same sex marriage law.

Outside the Supreme Court on the morning of June 26, 2015, James Obergefell (foreground, center) and attorney Al Gerhardstein (foreground, left) react to its historic decision.

Even minors are now protected in the practice of homosexual lifestyles and schools have been on notice to avoid discrimination against those students who choose to attend school functions with a same sex partner (such as Prom) or those that identify as the gender they were not physically born as.  Same sex couples now routinely are allowed to adopt and or raise children as well.  On September 20, 2011, per orders from President Barack Obama, the US military ditched the “don’t ask, don’t tell” policy of allowing gay members only so long as they remain covert, and gay servicemen and women are now allowed to serve as openly gay persons (and the world has not yet stopped spinning!).

What other changes remain to occur remain to be seen, some sure to annoy certain people and some sure to cause others to rejoice.  One thing is sure when discussing personal sexuality choices, it is impossible to make everyone happy!

Question for students (and subscribers): What are changes would you like to see occur?  Please let us know in the comments section below this article.