On May 17, 1943, RAF Squadron 617, later known as The Dambusters, embarked on Operation Chastise, a plan to bomb and destroy 2 dams to flood the Ruhr Valley in Germany. They were successful, largely because of the wacky weapon they used, a barrel like bomb that was rotated on a carriage under the bomber and then dropped to skip across the water to the dam, and then roll down the face of the dam to blow up right against the structure. Many times in wartime nations will stretch the limits of the imaginations of their inventors in an effort to achieve an advantage. Sometimes they work, and sometimes they do not. Here are 10 weapons that definitely stretch the imagination.

The idea here is to launch a balloon carrying several small incendiary bombs up into the jet stream and have them fly over the Western US and Canada where timers would release the bombs which would in turn start forest fires. Some of them made it and dropped their bombs, but no appreciable damage took place.

Developed by Barnes Wallis, the idea was to make a bomb that was big enough and when dropped would penetrate deep enough into the ground that when the giant explosion took place the shock waves would collapse structures like dams, bridges, tunnels, underground factories, submarine pens, and others. Dropped from 25,000 feet, the 10 ton Grand Slam would attain supersonic speed by the time it buried itself deep in the earth and blew up, destroying the target by landing near it instead of right on it. These bombs were used to attack the German submarine pens, railroad tunnels, battleship Tirpitz, and bury the V-3 giant guns located at Calais. Cracked note: The US developed their own 43,000 pound bomb called the T-12 after the war, but never used it since atom bombs became available.

Meaning “curved barrel” in English, it follows that this was a curved barrel! Designed for use with the world’s first assault weapon, the Sturmgewehr 44, this device would allow the user to shoot around corners, or more likely, from inside an armored vehicle, spraying the outside of that vehicle through a barely opened hatch. This would defend the tank from infantrymen armed with explosives or Molotov cocktails. Although the bullets would break up inside the curve of the barrel, the short ranged nature of the weapon actually made its use more effective. It came in different varieties with various angles of curves and a small periscope attachment was designed so the operator could see what he was shooting at. In any case, the barrels would wear out after only about 300 rounds. 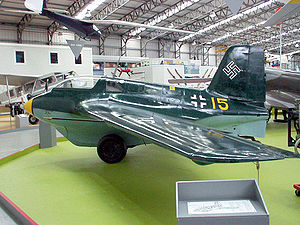 A short stubby rocket powered fighter made in desperation toward the end of the war while Germany was getting pounded by Allied bombers, the Komet was meant to clear the air of those bombers. Capable of 700 mph (test flight) the Komet could not fly very far, but if located near the target it could get up to altitude more quickly than any other fighter and make a high speed pass that could not be stopped by Allied fighters or the bombers machine guns. The tailless rocket plane was armed with 2 X 30 mm cannons, but of the 300 or so made, they accounted for only 9 to 16 Allied aircraft shot down. Most Komets were destroyed by their own pilots just trying to land the hard to handle airplane, or by Allied fighter planes shooting them up while the Komet was landing (they landed without power, having expended their fuel) or on the ground. Cracked fact: The Germans gave the Japanese plans for this plane and the Japanese designed their own version of it.

Development was halted before they were used in combat, but by that time the “bugs” had been fairly well worked out, and they probably would have worked if used. The idea was to drop a cylinder of sleeping bats from a bomber, the cylinder containing dozens of bats each with a tiny incendiary bomb attached. As the bomb fell to an altitude where the bats would not suffocate or freeze, they would be released at which time they were expected to seek shelter in the eaves of Japanese buildings, starting thousands of fires in the mostly wooden Japanese architecture. Merely designing a firebomb and timer small enough for a tiny bat to fly with was a real challenge, as was keeping the bats, preparing the bombs, and keeping the bats alive in flight. 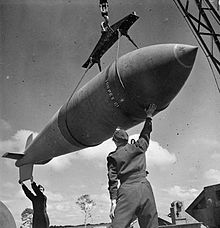 As described above, weapon designer Barnes Wallis created a depth charge bomb shaped like a 55 gallon drum that was made to rotate at 500 rpm, and when dropped would skip over the surface, therefore not being stopped by anti-torpedo nets, and roll down the face of the dam when it got that far. Special aiming devices were created so the bombers could release the bombs at just the right distance from the dams and special lights were used to project beams down onto the water, so that when they met, the pilot knew he was at exactly the right height. The 9,250 pound bombs worked, but damage was largely repaired within about 4 months and more than half of the fatalities were of prisoners and slave laborers in the valley.

Two super guns 430 feet long and buried at the Pas-de- Calais in France to shoot 310 pound shells at England with a 100 mile range. These totally impractical weapons were dearly loved by Adolf Hitler and the resources to design and build them would have been much more effective used elsewhere. They were buried by Grand Slam bombs before they ever fired. The method of operation was to use rocket boosters instead of a single powder charge, with ports along the length of the gun, each one firing as the shell moved past it down the barrel. The problems were that once built, the gun could not be re-aimed as it was in a fixed position, and the 310 pound shell was too small to inflict major damage. Finally, its stationary nature made it a sure target of Allied bombers, which in fact destroyed them.

A torpedo armed with 3000 to 4000 pounds of explosives (depending on model) and modified to have a suicide operator piloting it, this manned torpedo could be launched from a submerged submarine or a destroyer. A smaller version was designed for coastal defense. Over 300 were built, but only a couple small US vessels were sunk, with regular torpedoes having a much higher success rate than Kaitens. Amazingly, the combat range of the torpedoes was 40 or more miles.

Japanese for “Cherry Blossom,” the Okha was a rocket propelled human guided bomb, a missile with a man in it, designed to attack American ships or other targets after being dropped by a bomber aircraft. Obviously a suicide weapon, the rocket plane was packed with 2,600 pounds of explosives, and flew at 400 mph in level flight, or around 600 mph in a dive, meaning it could not be stopped by US fighters. Americans called them “Baka Bombs,” using the Japanese word for crazy. Although they did hit a few smaller US warships and transports, no large ship was ever hit or sunk by one, making their contribution negligible. The main reason for their ineffectiveness was that the twin engine “Betty” bombers that carried one apiece slung under the bomber were so laden that they were un-maneuverable and slow, allowing US fighter planes to shoot them down before they got into the range where the Okhas could be launched.

Nothing like it had ever been made or used before one was dropped on Hiroshima and a second was dropped on Nagasaki, destroying those 2 cities  within seconds. Now instead of a thousand bombers dropping 20,000 bombs, the US could have one bomber drop one bomb and attain similar or even greater results. The results were so horrific that no nuclear weapon has been used since, almost 70 years now, and that is with 8 to 10 countries having developed such weapons.

Question for students (and subscribers): What do you think was the most bizarre weapon from World War II?  Please let us know in the comments section below this article.