Saturday, April 4
Trending
You are at:Home»November»November 15»Not Even Death could Destroy the Body of the Android-building Saint Who Influenced Frankenstein and Found the Philosopher’s Stone!

On November 15, 1280, St. Albertus Magnus died, after having reportedly built an android and discovered the philosopher’s stone, but according to the faithful his body did not deteriorate and according to Mary Shelley, his writings influenced mad scientist Victor Frankenstein!

Dominican friar and Catholic bishop Albertus Magnus (Albert the Great) is today renowned as one of only 35 people to be designated a “Doctor” of the Catholic Church.  A polymath, Albert of Cologne may have been the greatest German philosopher and theologian of the Middle Ages, having dabbled in everything from alchemy to astrology to experimental sciences to music to natural law to natural philosophy to, well, you get the idea!

Accordingly his influence on many fields of study has been enormous.  Not surprisingly, this patron saint of Cincinnati, Ohio, medical technicians, natural sciences, philosophers, scientists, students, and World Youth Day has had numerous schools on both sides of the Atlantic Ocean named after him, as well as a plant species, an asteroid, and even a typeface!

Yet what particularly interests us are some of the more “supernatural” or “paranormal” claims about aspects of his life and afterlife.  Among the many legends attributed to him are suggestions that he created an automaton called “Androides” and that he discovered the philosopher’s stone long before Harry Potter.  Albert even wrote that he witnessed the creation of gold via “transmutation”, while others declare that Albert may have discovered an immortality-granting “elixir of life”.   Allegedly, Albert’s pupil St. Thomas Aquinas, to whom Albert allegedly passed the philosopher’s stone to, burned the “android”.  As for the philosopher’s stone, that also appears lost, if it ever existed in the first place.  Another legend concerns Albert’s remains and how divine intervention prevented his body from decomposing naturally.  Given these sorts of claims, it is no wonder that famed author Mary Shelley described Albert as an influence on her notorious Victor Frankenstein, a scientist bent on bringing to life his monstrous man. 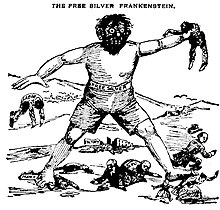 Frankenstein’s monster in an editorial cartoon, 1896

Question for students (and subscribers): Are any of these legends true?  Let us know your thoughts in the comments section below this article!

It should come as little surprise that the literature on Albert ranges from skepticism about the above legends to fervent wishes for them to be true.  Below are some good starting places for further research:

You can watch a video version of this article on YouTube!