Saturday, February 22
Trending
You are at:Home»December»December 12»December 12, 1862: What Was the First Ship Sunk by a Remote Control Mine? (USS Cairo)

On December 12, 1862, the United States ship, USS Cairo, an iron-clad gunboat of the City Class, was sunk in the Yazoo River by a remotely detonated Confederate “torpedo,” what naval mines were called back then.  The Cairo became the first ship ever sunk by a remote control mine.  (The Cairo was named after the city of Cairo, Illinois.)

Commissioned on January 25, 1862, Cairo was at first an Army gunboat, 175 feet long and 51 feet wide, protected by 2 ½ inches of plate armor, with a maximum thickness of 3 ½ inches of railway iron, built in Mound City, Illinois.  Powered by a steam engine driving a paddlewheel, the boat could chug along at 4 knots, sufficient for the designed duties of river patrol.   The crew of 251 men were armed with a considerable battery of 3 X 8 inch caliber smoothbore cannons, 3 X 42 pounder (the weight of an iron shot fired from the gun) rifled cannons, 6 X 32 pounder rifled cannons, 1 X 30 pounder rifled cannon and a single 12 pounder rifled cannon (to give the boat a defense against boarders).  Displacing 512 tons, the gunboat drew 6 feet of water.

After serving the Army on the Ohio and Mississippi Rivers, the Cairo was transferred to the US Navy on October 1, 1862.  River service entailed escorting other vessels, fighting Confederate gunboats, and conducting shore bombardment of fortified positions.  During the Vicksburg campaign the Cairo was assigned to sail up the Yazoo River as part of a back door attack on Vicksburg, and while clearing mines from the river in the area of Haines Bluff Cairo was the victim of a remotely controlled mine, that was detonated by Confederate soldiers hiding on the river bank when Cairo came up to the floating explosive.  Cairo sank in only 12 minutes, but all hands were able to successfully abandon ship and none of the crew were killed.

The wreck of the Cairo was discovered in 1956, and by 1960 numerous artifacts had been recovered from the wreck.  The unlucky gunboat was salvaged in pieces from the river bottom mud, and now resides above ground at the Vicksburg National Military Park, cleaned up and largely restored to its former appearance.  Exterior wooden supports prop up the gunboat.  In 1971 Cairo was named to the National Register of Historic Places.  Housed in what is now the USS Cairo Museum, Cairo is one of only four Civil War ironclads left in existence, the others being the USS Monitor, CSS Neuse and CSS Jackson. 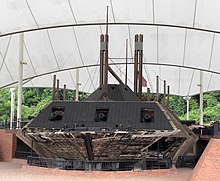 USS Cairo in her final resting place at Vicksburg National Military Park. A wooden framework has been built to support what remains of the ship.

Ships and boats have a way of finding new ways to be sunk, and Cairo became the first sunk by a remote control mine.  What other ships can you think of that were the first sunk in a certain way?

The featured image in this article, a U.S. Naval Historical Center Photograph of USS Cairo, is in the public domain in its country of origin and other countries and areas where the copyright term is the author’s life plus 70 years or fewer.