On May 11, 1862, the CSA ironclad, CSS Virginia, was scuttled in the James River to avoid capture by Union forces. The Virginia had formerly been the USS Merrimac and had fought the USS Monitor in the first battle of ironclad armored ships.  Over its long and illustrious history, the US Navy has lost a variety of vessels, and here we list some of the most famous of those losses.

Starting life as a French merchant ship named Duc de Duras built in 1765, she was given to the fledgling US Navy to fight the British in the American Revolution. In her short, 7 month career with the US, Bonhomme Richard fought and won the Battle of Flamborough Head against the British ships Serapis and Countess of Scarborough. When the battered Bonhomme Richard looked unable to continue battle, the British commander called on American Captain John Paul Jones to surrender, to which he famously replied, “Sir, I have not yet begun to fight!” Managing to maneuver close enough to lash the Bonhomme Richard to the much bigger and more powerful Serapis, Jones’s men were eventually able to overcome the crew of the Serapis and capture the British ship. Unfortunately, the Bonhomme Richard could not survive the massive damage she had received and sank after the battle, becoming a major player in US Navy History. 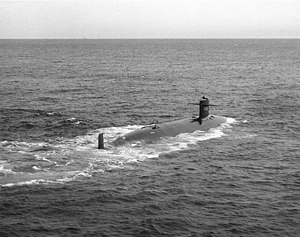 A huge dirigible (rigid frame airship) carrying 4 fighter planes and 7 machine guns, the Akron crashed during bad weather off the coast of New Jersey, killing 76 of the 79 man crew. At 785 feet long, Akron was 20 feet shorter than the German Zeppelin Hindenburg, but the Akron’s loss of life stands as the all time record worst airship disaster. Among the dead was Rear Admiral William Moffett, one of the Navy’s strongest proponents of airships. This disaster started the end of the airship era for the US Navy. 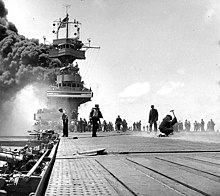 So heavily damaged at The Battle of the Coral Sea, Yorktown was miraculously repaired in time to play a key role in the battle of Midway a short time later that turned the tide of the war in the Pacific. After again sustaining heavy damage from Japanese carrier aircraft, she was torpedoed and sunk by a Japanese submarine while being towed to dock for repairs.

The Lady Lex was the first of only 4 full sized US Navy aircraft carriers sunk in combat (all in World War II, all in 1942). She was sunk at the end of The Battle of the Coral Sea, scuttled by a US torpedo after severe damage by Japanese carrier aircraft. 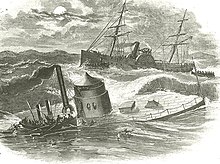 The first US Navy iron hulled and iron armored ship with a revolving turret, the Monitor fought the CSS Virginia (nee Merrimac) to a draw in the famous first battle of ironclad ships at Hampton Roads earlier in 1862. She sunk while being towed off North Carolina in heavy weather, something she was not built for. Her wreck was found in 1973 and salvage operations have been ongoing.

A sloop of war powered by both sails and a steam driven propeller, the Housatonic has the distinction of being the first ship sunk by a submarine (the CSS Hunley) during combat in Charleston Harbor. The Housatonic lost only 5 of her crew, while the Hunley was lost with all hands. 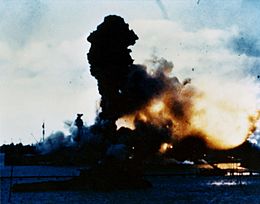 The star of the 1934 movie, Here Comes the Navy! (with Jimmy Cagney), the Arizona was sunk during the Pearl Harbor sneak attack when a bomb set off her magazines causing a massive explosion and sinking the ship very quickly. Of the 1512 crewmen aboard, 1177 died from the attack and sinking. With such massive damage, the Arizona could not be raised as her fellow stricken battleships were, and she rests on the bottom of Pearl Harbor to this day as a memorial.

Sunk by a Japanese submarine after delivering the first atomic bomb to Tinian, the secrecy of her mission precluded a distress call and resulted in no search for the survivors until some were spotted by chance 3 and a half days after the sinking. Of the 1196 men crewing the ship, only 317 survived, the greatest loss of life on a US Navy ship at sea in history. Many of the men were eaten by sharks during their 4 days of hell in the water, either after they died or while still alive. The horror of this incident is recounted in the 1975 movie, Jaws, as well as Discovery Channel’s production Oceans of Fear, which described the disaster as the worst case of mass shark attacks in human history. 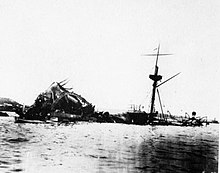 Built as an armored cruiser and later called a battleship, the Maine was only 9 years old when it was berthed in Havana Harbor, Cuba, sleeping quietly when at 9:40 pm on February 15, 1898 she exploded with a massive blast, quickly sinking the ship and killing about 266 of the 355 crew. A purposely false newspaper uproar (imagine that!) fanned the anti-Spain fires and the cry went out, “Remember the Maine, to hell with Spain!” Thus, the mysterious explosion and sinking of the Maine helped cause the Spanish-American War, and “Remember the Maine” went down in US folklore as one of our most famous battle cries. To this day, investigators do not agree on what may have caused the forward powder magazines to explode.

Question for students (and subscribers): What would your list look like?  Please let us know in the comments section below this article.

Lech, Raymond B.  The Tragic Fate of the U.S.S. Indianapolis: The U.S. Navy’s Worst Disaster at Sea.  Cooper Square Press, 2000.