10 Famous Ships That Were Scuttled (Sunk by Their Own Crews)

On May 11, 1862, Confederate sailors sunk their own ship, the CSS Virginia, in the James River outside of Norfolk, Virginia to avoid capture by Union troops.  Ships have been intentionally sunk by their own crews for a variety of reasons, usually to avoid capture by the enemy, sometimes after battle damage and sometimes while the ships were perfectly sound. At times, even whole fleets were scuttled.  German U-boats would be scuttled when forced to the surface and unable to continue the fight to avoid capture of sensitive encoding equipment, let alone the boats themselves, a common practice in World War II.  Several severely damaged US and Japanese aircraft carriers were also scuttled during World War II.  Here we list 10 of the most famous incidents of ships destroyed intentionally by their own people, showing many of the reasons for doing so.

The aircraft carrier Oriskany was a retired US Navy carrier sunk to form an artificial reef, providing habitat for fish and ocean life.  Many ships have been sunk for this purpose in the past few decades, giving sportsmen rich areas for fishing and diving.  Another US aircraft carrier, the USS America was experimented on with underwater explosions before being scuttled in 2005.  Data from the experiments on the America is to be used to construct more survivable future aircraft carriers.  Other obsolete ships have been used as target practice, most spectacularly after World War II to observe the effects of nuclear bombs on a fleet.9.  Bruges-Zeebrugge, 1918.

Another reason for intentionally sinking your own ships is to block the harbor or other passage to deny the enemy ships the ability to pass through.  In this raid the British sent 3 obsolete cruisers packed with cement to block the passage of German U-Boats from the port of Bruges-Zeebrugge in occupied Belgium.  The sunken cruisers successfully blocked in the U-Boats, but only for 3 days as the Germans dug a channel around the sunken ships. 8.  USS Lexington, 1942. 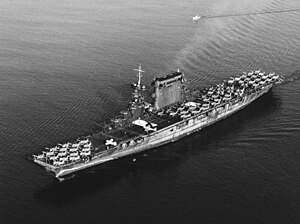 The Lady Lex was damaged so severely at the battle of the Coral Sea that American admirals decided to sink her themselves instead of her possibly falling into the hands of the Japanese.  After being struck by 2 torpedoes the Lexington was able to conduct hasty repairs and get speed back to 24 knots, but after 2 bomb strikes, despite being able to recover her aircraft, fires inside the ship later led to 3 huge explosions and an uncontrollable fire.  Lexington was sunk with 5 torpedoes from a US destroyer.  Four Japanese aircraft carriers were scuttled in a similar manner during the battles of the Coral Sea and Midway.7.  Black Sea Fleet, 1854.

During the Crimean War at the Siege of Sevastopol, the Russians removed the cannon from their ships (2 of the ships were 120 gun ships of the line, others had up to 84 cannon) to be used on land and the crews to be used as land based fighters.  After a year long siege, the French, British, and Turks finally captured Sevastopol anyway. 6.  Cortez’s Fleet, 1519.

Spanish conquistador Hernan Cortez defied the governor of Cuba and took 11 ships to Veracruz, Mexico to conquer the Aztec Nation.  In order to keep any of his men from deserting and sailing back to Cuba, he had his fleet scuttled.
5.  Graf Spee, 1939.

This powerful German “pocket battleship” had been fighting British cruisers Ajax and Cumberland, and New Zealand cruiser Achilles in the South Atlantic when she pulled into port at Montevideo, Uruguay, for repairs.  The victim of a deception campaign, Capt. Langsdorff was led to believe more British ships had arrived and joined the 3 cruisers waiting for Graf Spee to be forced by the 3 day limit allowed in a neutral port to go back to sea.  Not wanting his men killed in a hopeless battle, Langsdorff had his ship scuttled as it left the harbor.  Langsdorff apparently could not stand the humiliation and shot himself 3 days after the scuttling.   4.  French Fleet at Toulon, 1942.

After the French surrender of 1940, the Vichy French government was allowed to govern southern France, but when the allies invaded North Africa the Germans decided to occupy the south coast of France as well.  To keep the fleet anchored at Toulon out of the hands of the Germans, Admirals Marquis and Laborde ordered the scuttling of the fleet, including battleships Strasbourg and Dunquerque. 3.  German High Seas Fleet, 1919.

In an act of defiance, 50 ships of the German High Seas Fleet that had been interned at Scapa Flow after World War I were scuttled by their crews to keep them out of British hands. Admiral Ludwig von Reuter was jailed by the British for ordering the scuttling, but was honored in Germany as a hero.  The fleet had been ordered to Scapa flow and British custody under the terms of the German surrender at the end of the war.2.  CSS Virginia, 1862. 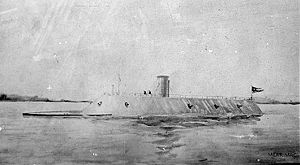 The former Union Navy USS Merrimac, the Virginia was an ironclad that fought the famous battle with the USS Monitor at Hampton Roads in the first battle of ironclad ships.  The historic vessel was scuttled as she was trapped in the James River with no prospect of safely escaping.  For some reason, the Virginia is commonly referred to by her original name, Merrimac,  before the ship was captured by the Confederates, rebuilt as an ironclad and renamed Virginia, perhaps because of the alliteration of “Monitor and Merrimac” sounds better than “Monitor and Virginia.”1.  Bismarck, 1941.

The great and fearsome Bismarck, the terror of the sea, was being pounded by a large British fleet and carrier torpedo planes as she fought on alone.  Hit by over 400 shells and several torpedoes (at least 3 before the final battle), including a torpedo fired from the British battleship HMS Rodney (the only time in history that one battleship torpedoed another), the Bismarck’s guns could no longer fire and the ship could not maneuver.  When the crew finally abandoned ship, scuttling charges were set off to sink the mighty battleship to spare her the humiliation of being captured.  British sailors bitterly denied that the ship had been scuttled, claiming they alone had sunk it, but the fact is that Bismarck was sent to the bottom by her own crew.

Question for students (and subscribers): What ships would you add to the list?  Please let us know in the comments section below this article.