On December 11, 2005, racial tensions exploded into violence in the Sidney suburb of Cronulla, New South Wales, Australia, with rioting by White Australians against anyone they perceived to be of Lebanese descent.  The riots lasted a few days, and spread to surrounding suburbs.

Australia, not unlike the United States, was originally settled by the people known today as Aborigines.  When British explorers (17th Century) and colonists (18th Century) settled the giant island continent, the indigenous people declined from as many as a million people to a fraction of their previous numbers, mostly due to disease introduced by Europeans.  Many other natives died in frontier disputes with Europeans.

Australia became an established part of the British Empire, and by the 21st Century had blossomed into a productive country of over 20 million people, only about 3% of Aboriginal descent, almost all the rest descended from people from the British Isles.  After World War II, the demography of Australia started changing dramatically, due to massive immigration from Europe and Asia, as well as from other Pacific countries.  (Today more than a quarter of Australia’s population was born outside of Australia.)

In 2005 tensions between British (White) Australians and Lebanese/Muslim immigrants were lit by a confrontation between teenage and young adult Middle Eastern immigrants and young Anglo-Australians around the beaches.  The mostly White Cronulla area youth resented incursions by the Middle Eastern youths from other suburbs, people the White youths called “Westies.”  Minor confrontations and fights, not unusual during the Australian summer in beach areas between youth groups, built up into the incident known as the Cronulla Riots.  White Australian girls complained of Westies attempting to pick up the girls, and calling the girls names, such as “sluts,” when the advances of the Westies were refused.  This “assault” on their womankind enraged the White youths and triggered more fights, blossoming into riots.  Exaggerated reports of White girls being attacked and/or raped poured fuel on the fire. 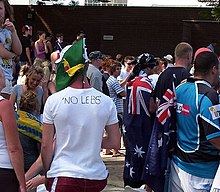 When a large crowd (5000) gathered at a Cronulla beach on Sunday, December 11, 2005, normal partying and beach activity took place among White youths until a young man of apparently Lebanese descent showed up and was severely verbally abused by the crowd.  When the victim allegedly threatened to “blow youse all up!” the crowd became violent, with growing violence directed at any person perceived to be of non-White lineage, such as Pakistani, Arab, or even Lebanese (to the White Australian youths, all these “foreigners” were “Lebanese”). 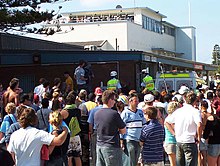 Not particularly deadly by horrific race riot standards of other countries, the 26 people injured, including a police officer horrified the Australian population.  Another 16 people were arrested.  Yet, the worst was still to come.  Car loads of people from the Western suburbs convoyed to the beach in order to seek “revenge” for the attacks against the non-European immigrants.  These people brought knives and clubs as weapons.  The attack brought riot police and the rioters damaged around 100 cars, beating the innocent vehicles with iron pipes and bricks.  Several people were severely injured by the irate “Lebanese,” and a further 14 arrests were made.  Scores of pipes and other weapons were confiscated by police, including Molotov cocktails.

Over the next couple days, threats, vandalism, and minor riots broke out in other nearby suburbs, with mostly Islamic youths declaring “war” on the “Aussies.”  A Tongan Christian Church was burned, and over 800 police were mobilized.  Another 11 arrests were made, and at least 7 other people were injured, as was another police officer.  One man was beaten with a baseball bat when he attempted to defend his wife.

Altogether, 51 people were arrested in Cronulla at the original riots, and another 53 were arrested in surrounding suburbs over the next few days.  Those 104 arrestees faced 285 criminal charges.  Obviously, such violence generated a certain amount of ongoing resentment that lingers even today, although anti-racism protests were organized and attended by people of all ethnicities.  Local businesses suffered some damage, but mostly were hurt by lost business due to police lockdowns and decreased tourism over the Christmas shopping and holiday season.

Even 10 years later, in 2015, the New South Wales Supreme Court denied permission to hold an anniversary rally in memory of the riots, fearing such a demonstration would again inflame racial tensions.  Minor gatherings of Muslim and White Australians were kept apart by the police with only 2 people arrested.  The 2016 motion picture, Down Under, commemorates the Cronulla Riots.

Ethnic, racial, religious, and national tensions remain a part of today’s world, especially as people become more and more mobile, and immigration policies become more liberal.  Mass relocation of refugees also contributes to the changing face of demographic composition of many countries, often with tensions exploding into violence.  Sadly, we expect more such events and honestly do not expect any sort of magical peace to descend upon the world any time soon.  How we wish we are wrong!

Question for students (and subscribers): Have you ever been attacked by rioters?  Please let us know in the comments section below this article.

The featured image in this article, a photograph by Warren Hudson of police observing crowds prior to confrontations, is licensed under the Creative Commons Attribution 2.0 Generic license.  This image, originally posted to Flickr, was reviewed on November 26th, 2006 by the administrator or reviewer Dodo, who confirmed that it was available on Flickr under the stated license on that date.