10 People Who Were The First to Die (10 Different Ways)

As described above, this pair was attempting to cross the English channel in a balloon.  Their balloon was actually a combination hot air and hydrogen balloon. In honor of De Rozier, today’s version of the combination gas (helium) and hot air balloon is called a Roziere Balloon.  De Rozier is also historically notable for being one of 2 people on the first ever untethered (free) balloon flight.

Not only was this guy not a scientist, but he was also 61 years old at the time of his accident.  He dangled below his parachute below a hot air balloon about 5000 feet over Greenwich, England when he had the men in the balloon release the parachute.  The inverted cone shaped parachute was too small for his weight, the weight of the basket he was in, plus the weight of the parachute itself and he fell rapidly.  Then, the parachute inverted (inside out) and Cocking crashed to his death.  This accidental death slowed down the progress of parachuting for a while. 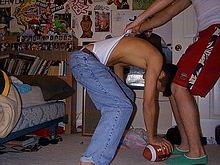 Proof that people are still dreaming up new ways to die, the 53 year old Denver was the victim of a drunken prank when his underwear was pulled up over his head in an “Atomic Wedgie.”  The hapless Denver suffocated his way into history.

Tracy was working at an animal laboratory at Regions Hospital in Minnesota  and was using a large, walk-in size autoclave to sterilize animal cages and equipment.  (An autoclave is like a steam oven used for sterilization, often of surgical instruments.)  She walked into the autoclave and somehow the door closed behind her and the machine went through its cycle, sterilizing the poor 31 year old lady to death.

These three Soviet cosmonauts were the first (and so far the only) people to die in outer space.  They died of decompression and suffocation when their Soyuz 11 craft was docking with Salyut 1 (space station) and a cabin vent valve accidentally opened.  All other astronauts and cosmonauts that have died on missions died within the Earth’s atmosphere or on impact with the Earth.

This US Army lieutenant was the first person to die in a powered airplane crash.  None other than Orville Wright was the pilot of the Wright Flyer he was demonstrating for the Army when the right propeller broke and the plane went in nose first.  The 26 year old Selfridge suffered a fractured skull and died later that night.  Wright suffered a broken leg, broken ribs, and an injured hip.  This resulted in the invention of the flying helmet.

A Chinese criminal living in San Francisco, Jon was convicted of the murder of a rival gang member.   After an attempt to gas him directly in his cell failed, a makeshift gas chamber was made and he was then successfully killed with hydrogen cyanide gas.  Prison officials had attempted to kill Jon while he slept in his cell, but it became obvious a closed room was needed.  The officials rigged the butcher shop of the prison as a temporary gas chamber and executed a cat to test their new apparatus (a pest control fumigator).  In a typical government blunder, the temperature in the “gas chamber” was 52 degrees F (a heater failed and the target temperature was 75 degrees F) so a portion of the hydrocyanic acid just puddled on the floor.  The 29 year old Jon took at least 6 minutes to die.

Convicted of killing his common law wife with a hatchet, Kemmler was executed by the State of New York at age 30 for her murder, the first person electrocuted intentionally in the electric chair. After a 17 second jolt, he was declared dead, but was soon seen to be breathing.  Officials hurriedly gave him another nice long jolt, this time popping blood vessels and more or less cooking him.  The execution took 8 minutes.   Cracked fact: The executioner was given the title “State Electrician.”

Struck and killed by an Anglo-French Motor Carriage Company car being demonstrated in London as she crossed a road, Driscoll is the first known pedestrian killed by a car.  Incredibly, the car was modified to have a maximum speed of only 4.5 mph  (instead of its normal top speed of 8 mph) and Driscoll still not only managed to get hit, but also get killed.  The death was ruled accidental and the coroner said he hoped “such a thing would never happen again.”  Little did he know that over half a million people would die on Britain’s roads over the next 100+ years.

You might think the date is a typo, but no, it really happened way back then, and in Ireland at that.  Ward was a scientist and was riding in a steam powered automobile (the only kind of automobile then) when she fell from the vehicle and broke her neck, becoming the first motor vehicle accident fatality in history.  (The first American to die in a car accident was Henry Bliss in New York City when he was struck by an electric powered taxi.)

Question for students (and subscribers): Who else would you put on this list?  Please let us know in the comments section below this article.