Tuesday, August 4
Trending
You are at:Home»Society»Military»October 23, 1739: The War Started over A Severed Ear

On October 23, 1739, the War of Jenkins’ Ear began when British Prime Minister Robert Walpole declared war on Spain following the exhibition in Parliament of the severed ear of a British captain allegedly maimed by Spaniards.

In 1731, a British captain named Robert Jenkins captained a British brig sailing off of Florida’s coast.  When a Spanish patrol boat boarded Jenkins’s brig, the Spanish commander cut off Jenkins’s left ear, accusing the British captain of smuggling.  The ear-severing Spaniard then taunted Jenkins, daring him to “tell your King that I will do the same, if he dares to do the same.”

A full seven years later, Jenkins testified before Parliament, possibly even producing his severed ear (not sure why he would hold on to it for seven years…) during his testimony. 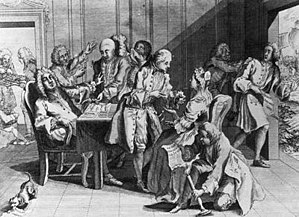 Robert Jenkins hands a dismissive Prime Minister Robert Walpole his severed ear, as his companions lift off his wig to show the scar; one of Walpole’s associates displays total indifference, preferring to converse with a lady. Satirical Cartoon, 1738, British Museum

Britons considered the Spanish savagery against Jenkins as an insult to their whole nation.

The next year, King George II authorized Britain’s admiralty to launch maritime reprisals against Spanish ships.  The first such attack occurred on October 22, 1739, although war would be officially declared the next day on Saturday, October 23, 1739.  From there, the war would drag on until 1748, lasting nearly a decade and being fought throughout the Caribbean Sea and the Atlantic Ocean.  The combined number of dead and wounded reached as high as 29,500, in addition to perhaps over 500 ships lost on both sides.  Making matters worse, the war ultimately merged with the even larger War of the Austrian Succession, a world war that lasted from 1740 to 1748.  This wider conflict brought in practically all of the great powers of Europe and their colonies.

All the participants of the War of the Austrian Succession. Blue: Austria, Great Britain, the United Provinces with allies. Green: Prussia, Spain, France with allies.

Sometimes, seemingly little things, such as one man losing an ear, can start some of the biggest events in world history!

Question for students (and subscribers): Was what happened to Jenkins a justifiable reason for starting a war?  Please let us know in the comments section below this article.

To learn more about this incident and other weird events in British history, you could check out The War of Jenkins’ Ear, and Other Odd Bits of History

For a more thorough examination of this particular incident and its role in the wider war, see this book.