On October 23, 1812, the mad General Malet seized control of the police of Paris and attempted a coup d’état against Napoleon‘s Empire.

During the summer of 1812, Napoleon led his army on campaign against Russia, traveling deeper into enemy territory than he intended and eventually reaching Moscow.  Napoleon and his ministers back in Paris were used to receiving messages from each other on a daily basis, even if the messages took a few weeks to reach their destination.  Due to the distance covered, the routes between Napoleon and his capital of Paris were not fully secured and couriers began to have trouble getting through safely.  By October 22nd, no one in Paris had heard from Napoleon or the army in the past few weeks.

That evening Claude-François Malet escaped from the mental asylum where he was being held.  A former general, Malet had been thrown in prison in 1809 for sedition but later released at the request of his wife to a private mental asylum.  After his escape, he quickly forged papers proclaiming that Napoleon had been killed, counting on the lack of news from Napoleon to make his plot believable. 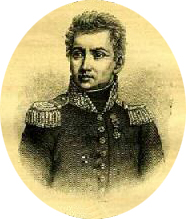 On the morning of the 23rd, Malet donned a general’s uniform and approached the colonel of the 10th Cohort of the Paris National Guard.  Malet presented his forged documents indicating that Napoleon had died and that the Senate had moved quickly to establish a new government.  The orders went on to inform the colonel that he was being promoted to general and that he should put the 10th Cohort at Malet’s disposition with which to arrest leading members of Napoleon’s government.  Overwhelmed by the news and the documents, the colonel of the 10th Cohort acquiesced and turned his troops over to Malet.

Next Malet took his newly found troops to the prison of La Force and presented more forged orders to release two other generals, Lahorie and Guidal, who had worked against the government in the past.  Once he secured their release, Malet sent Lahorie and Guidal with some of the troops to arrest Napoleon’s ministers.  They surprised the Minister of Police, General Savary the Duke of Rovigo, in his bed, taking him prisoner.  They then then arrested his subordinates, effectively leaving the the police of Paris leaderless and unlikely to interfere.

Meanwhile Malet had gone to the home of General Hulin to take command of the troops garrisoned in Paris.  Malet told Hulin the news of Napoleon’s death and informed him that Hulin was to turn over his command to him.  Growing suspicious, Hulin questioned him, and Malet responded by drawing his pistol and shooting Hulin in the jaw, leaving him for dead.

Malet then proceeded to attempt to take command over the troops anyway. Earlier that morning he had sent very similar forged orders to Colonel Doucet, indicating Napoleon’s death, a promotion to general for the colonel, and the need to turn over the troops to Malet.   But Doucet was suspicious about the date of Napoleon’s death, October 7th, given that he knew the Ministry of War had received one letter from Napoleon dated the 7th.  When Malet entered Doucet’s office to take command, Doucet recognized him as a former inmate and disarmed him.  Responding quickly, Doucet ordered the 10th Cohort to its barracks and informed the War Ministry.  Before long the other two generals were arrested and their prisoners released, and Paris was back to normal.  The three generals were judged by military tribunal and executed by firing squad. 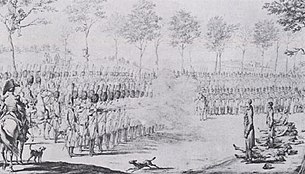 Execution of Malet and his accomplices

Although the coup failed, Napoleon and his Minister of Police were embarrassed that a single escapee from a mental asylum caused such trouble before being stopped.

Question for students (and subscribers): Should Napoleon have been overthrown in 1812?   Please let us know in the comments section below this article.

For more information, this article from the International Napoleonic Society is a good place to start.

Nathan D. Jensen graduated from the University of Wyoming with a B.S. in Computer Science and a minor in History. He is a Fellow of the International Napoleonic Society and specializes in military history.