On October 5, 1789, the women of Paris marched to Versailles to confront King Louis XVI about his refusal to abolish feudalism, to demand bread, and to force the King and his court to move to Paris.

English playwright and poet William Congreve (January 24, 1670 – January 19, 1729) famously noted, “Heav’n has no rage like love to hatred turn’d, Nor Hell a fury, like a woman scorn’d.”  Perhaps his words were prescient for the violent chaos of the French Revolution as best exhibited when a veritable mob of weapons wielding women wanted to show just what they could do when scorned by their king. 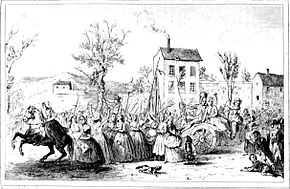 The women hailed by onlookers on their way to Versailles (illustration c. 1842)

The French Revolution, a pivotal event in modern history, began with the storming of the Bastille by French Revolutionaries on July 14, 1789.  Over the next few months, many hoped that some kind of agreement or compromise could be reached among the various groups within France. In the summer of 1789, it was not at all clear that the monarchy was necessarily going to be overthrown.

Unfortunately, the elites in France did not entirely want to do away with the amount of societal privileges that revolutionaries demanded be abolished.  Nor did the government adequately address the serious issues of food distribution associated with the suffering of the general public.  In fact, to make matters worse, the monarchy in effect insulted its people by attending a lavish banquet for aristocratic troops held on October 1, 1789.

Four days later, a group of angry, hungry women seeking bread and arms gathered more and more supporters as it pushed on the royal palace of Versailles.  By the time the women reached the palace, their patience for the monarchy was greatly diminished.  They referred to their queen, Marie Antoinette, as a “bitch” and a “whore.”  They even attacked the palace in a furious fit of violence that resulted in some victims of the mob having their heads hoisted up on pikes.  The Marquis de Lafayette (Washington’s buddy in the American Revolution) did what he could to deescalate the situation and succeeded…for a time. 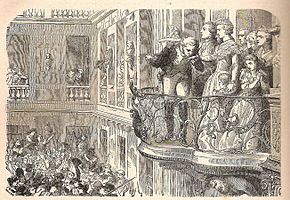 Lafayette at the balcony with Marie Antoinette

He may have saved his monarchs from slaughter on that particular day, but the march of the women demonstrated their determination, ferocity, and willingness to physically do what they perceived as necessary to get what they want.  It was a bitter taste of more frightful things to come!

Question for students (and subscribers): What were some key roles that women played during the French Revolution?  Please let us know in the comments section below this article.