On October 4, 610 A.D., Heraclius arrived by ship from Africa at Constantinople, overthrew Byzantine Emperor Phocas in one of the most badass coups in history, and became Emperor.

Future emperor Phocas, seen on the coin above, did not have an easy life. When he and others in the Byzantine army attempted to express their grievances to then Emperor Maurice’s government, not only were their requests rejected, but Phocas was himself humiliated by court officials by being slapped. Subsequently, Phocas led a rebellion of Byzantium’s Balkan army that forced Maurice to abdicate, but that was not good enough for Phocas.  In 602 A.D., the newly crowned emperor dealt with his predecessor viciously.  Phocas first had Maurice’s six sons executed before their father’s eyes after having dragged Maurice from a monastic sanctuary.  After Maurice was also executed, he and his sons’ bodies were thrown in the sea, while their heads were exhibited in Constantinople.  Meet the new boss, WORSE than the old boss!

A 17th century drawing of Phocas, based upon coins bearing his image

Phocas is often (if not just about always) labeled in books as a “tyrant”.  Not only did he violently dispose of his predecessor’s family, he undertook other policies that brought about the suffering of his people.  Of course, some of the problems were not entirely his own doing.  In any case, during Phocas’s reign, he faced numerous threats from neighboring powers and even rivals to the throne.

As the situation deteriorated, a substantial rebellion began in North Africa in 608 A.D.  A brutal civil war ensued for the next two years as the Byzantines’ Persian neighbors seized the opportunity to strike at Byzantine territory.  As the crises dragged on, a prominent leader of this rebellion, Heraclius, finally made his way to Constantinople in 610 A.D.  The political and military elites in the city switched sides and eventually a captured Phocas was brought before Heraclius.  The triumphant rebel allegedly asked the usurper of Maurice, “Is this how you have ruled, wretch?”  Phocas reportedly replied, “And will you rule better?” Heraclius, rather than simply say, “Yes, I’ll do a much better job.  Thanks for asking,” instead personally killed and even beheaded Phocas right on the spot.  The victorious rebels paraded Phocas’s mutilated body through the capital before burning what was left of it.  Well, as they say, “Thus always to tyrants!”

Yet, what makes the confrontation particularly remarkable is that it actually ended with the successful usurper personally slaying the “evil emperor”.  We usually only see such things in fiction (ahem, Star Wars or Mortal Kombat).  More often than not, only in books, movies, and video games do we have the protagonist and antagonist meet in a scenario in which only one walks away still alive.  We did not, after all, have FDR personally fight and kill Hitler.  Even in cases where an opponent did not commit suicide a la Hitler, the historic villain may have been dealt with by agents of the victor.  In 610 A.D., however, the people’s champion indeed did not delegate to subordinates, but instead confronted and killed his adversary in person in one of only a handful of such instances in all of human history.

Question for students (and subscribers): Was Heraclius right to execute Phocas?  Could you ever imagine such a scenario occurring in modern times?  Please let us know in the comments section below this article. 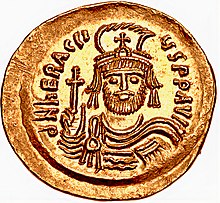 For more on Maurice, Phocas, Heraclius, and a bevy of other Byzantine emperors, I strongly encourage you to check out Timothy E. Gregory’s excellent A History of Byzantium

(Blackwell Publishing, 2005).  Gregory is a notable historian of ancient Greece and Byzantium who teaches at The Ohio State University. His book provides a concise overview of Byzantine history from 306 A.D. to 1453 and includes many fascinating comments on Byzantine emperors’ beguiling personalities.

The featured image in this article, Miniature 41 from the Constantine Manasses Chronicle, 14 century (Usurper Phocas and the assault against him from the armies of Heraclius), is a faithful photographic reproduction of a two-dimensional, public domain work of art. The work of art itself is in the public domain for the following reason: this work is in the public domain in its country of origin and other countries and areas where the copyright term is the author’s life plus 100 years or less.