Nowadays, when people think of casino games, some classics like poker and roulette come to mind; however, it is the slot machine that is the most popular casino game ever made and, in many ways, defines the casino experience. Everyone is familiar with casino floors filled with slot machines, while online slots have taken the industry to a new height. Certainly, we have come a long way since the mechanical beginnings of the slot machine. 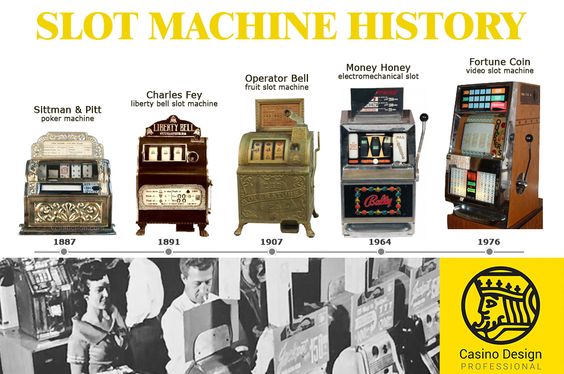 Here we will look back at the formative years of the slot machine as a mechanical game that shaped the casino industry.

To start the journey of the slot machine, we must travel back to 1891. The first-ever slot was developed by Sittman and Pitt, a New York-based company specializing in mechanical games. This trailblazing machine featured 5 drums and 50 playing cards. Costing a nickel to play, the machine became wildly popular in bars.

Sittman and Pitt’s machine involved a lever, something that would become synonymous with the slot machine. Players could collect wins for lining up poker hands across the reels. To tilt the edge towards the house, the ten of spades and jack of hearts were removed from each machine. Back in those days, wins were paid out at the bar, but in every other aspect the design and concept of the first-ever slot is remarkably similar to what we know today.

So, Sittman and Pitt managed to set the blueprint that would be standard for the next century. However, it was between 1887 and 1895 that mechanical slots became more sophisticated. While Sittman and Pitt’s machine didn’t have automatic payouts, the Liberty Bell machine did. Developed by Augustus Fey (although not confirmed), there’s some confusion about when this machine launched.

The date is placed between 1887 and 1895, so either before Sittman and Pitt or after. Either way, the Liberty Bell sported three reels instead of 5 drums and replaced the playing cards with symbols (hearts, diamonds, spades, horseshoes, and the liberty bell). In doing so, Fey took the slot game on another familiar evolutionary step that we recognize today.

Because Fey never patented the device, others could copy it and so the common design of the slot was put in place. Slot machines were banned in 1902, although they continued to be built. In 1907, the Operator Bell slot was launched in an era where gambling was not allowed. As no cash payments were available, fruit symbols were added, and people were paid with chewing gums and sweets based on the flavour of the fruits. It was during this time that the now familiar BAR symbol was also added.

By 1908, the Operator Bell (created by Herbert Mills) had become wildly popular and was in most stores, salons, bowling alleys, and tobacconists.

For the next half-century, the slots designed in the formative years of the game became the manufacturing standard. Indeed, for fifty years slots remained purely mechanical. However, in 1964, the mechanical era started to fade when the first electromechanical slot was made. Made by Bally, the Money Honey set a course that would push slots into increased reliance on electricity and eventually into the digital realm of online slots.

Electric was the future, but mechanical slots set the template for what we still recognize about slot games to this day.

Question for students (and subscribers): Why do you think slot machines continue to be popular?  Please let us know in the comments section below this article.

The featured image in this article, a photograph by Rodw of slot machines at Wookey Hole Caves, has been released into the public domain worldwide by the copyright holder of this work.

Maria Taylor is content marketing expert and has contributed on several blogs online. She loves to write for blogs! Feel free to connect with her on Twitter and LinkedIn.