On September 4, 1972, The Price is Right, created by Bob Stewart, Mark Goodson and Bill Todman, made it television debut with Bob Barker as host.  The show would go on to become the longest running American television game show, and Bob Barker, host from 1972 to 2007 (when Drew Carey took over) was the longest tenured US television game show host.  The remarkable show is still going strong, still with Drew Carey at the helm.  In 2007, TV Guide Magazine called The Price is Right the greatest game show of all time.  Considering the incredible array of television game shows competing for our watch hours, being named “the greatest” is quite an accomplishment.

(Note: The author of this article briefly served in the US Marine Corps Reserve with Drew Carey, and often saw Drew reading newspapers and magazines, while taking notes and talking into a tape recorder late at night at the local Kenny King’s restaurant, always looking for new material to joke about.  Drew was quite personable and a good humored, funny guy, just like he seems on television.  It is the real “him.”) 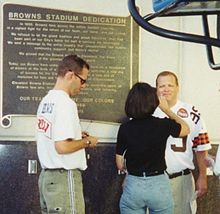 Carey preparing for a TV broadcast at the dedication of Cleveland Browns Stadium, September 1999.  Photograph byShamrox at English Wikipedia.

Perhaps you recall a scene from the Adam Sandler film, Happy Gilmore (1996), in which Sandler (as the title character) and Bob Barker as himself) have a dispute on a golf course, resulting in a physical fight.  The elderly Barker (age 73 at the time) displays his proficiency at Karate (he is a real life black belt).  The scene is hilarious.

On the subject of hosts of game shows with a long, long tenure on television, host Pat Sajak and assistant Vanna White have been bringing us Wheel of Fortune since Sajak took over in 1981 and White joined him in 1982.  (This pair still looks great after all these years.)

Believe it or not, television game shows go all the way back to 1938 when few people even knew television existed.  The first such show was called Spelling Bee, only 15 minutes per episode and also broadcast over the radio.  Shockingly, Spelling Bee was not an American show, but a British production!  (Yes, the show was a spelling bee.  Well, duh!)  In the US, the radio game show, Truth or Consequences, was adapted for television in 1950, and became the first commercial television game show, closely followed by the CBS Television Quiz.  (Note: Our buddy, Bob Barker, hosted Truth or Consequences from 1956 to 1975.)

Televised game shows became dominated by quiz type shows in the 1950’s, at least until the fact that some shows were rigged became public in a national scandal that besmirched such shows.  Other game shows, however, continued to be popular, with classics such as What’s My Line?, I’ve Got A Secret, and To Tell the Truth featuring the celebrity panel format.  (Celebrity panel shows continued to show up, notably Hollywood Squares.) The 1960’s saw even more expansion in the game show genre, with even more classic shows such as The Match Game (with the absolute greatest game show theme music of all time, says me!), The Newlywed Game, and The Dating Game.  Let’s Make a Deal premiered in 1963, a year before our personal favorite, Jeopardy, in 1964.  (Note: Many cultural allusions have been made to game shows, and one of the funniest is the Weird Al Yankovic parody song, “I Lost on Jeopardy,” a take off on Greg Kihn’s “Jeopardy.”)  Announcer Don Pardo, veteran of many television game shows with his booming voice, parlayed his fame into the role of announcer for Saturday Night Live. 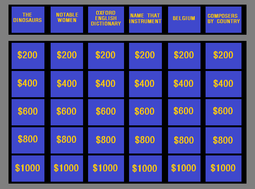 The layout of the Jeopardy! game board since November 26, 2001, showing the dollar values used in the first round.  Drawing by SethAllen623.

Sometimes game shows featured physically fearless feats (we keep telling you, we love alliteration!), at times making the contestant look ridiculous, which is exactly what the daytime television viewer loves!  Examples of this genre of game show include Beat the Clock and Minute to Win It.  Other shows also tested the contestants’ physical skills in more mundane activities, such as Bowling for Dollars.  Much more physical and strenuous shows such as American Gladiator took things up a couple notches.  Another game show “classic” was The Gong Show, enough of a success that it even spawned its own feature film version!  Plus, the star of and originator of The Gong Show, Chuck Barris, also wrote an autobiography (which was also made into a movie by the same name in 2002) called Confessions of a Dangerous Mind in which Barris, also the creator of The Newlywed Game and The Dating Game television shows and the writer of the hit song “Palisades Park,” claims he worked for the CIA as an assassin in the 1960’s and 1970’s, all while he was producing and starring in game shows!  Does it get any more American than that?

Aside from racing through miscellaneous tasks and competing against others by matching knowledge of songs (Name That Tune, Don’t Forget the Lyrics), other game shows have people competing against themselves in an effort to win the big money.  Examples of this sort of show include Who Wants to Be a Millionaire? and a show just for geniuses called 500 Questions.  (This so called game show sounds a lot like the author’s wife when the author comes home late…)  Some shows pit family against family, most notably on the aptly named Family Feud, a show where you can really lose faith in the intelligence of people!  Are You Smarter Than a 5th Grader? pits adult contestants against 5th grade students.  (Why do people torture themselves in this manner?) 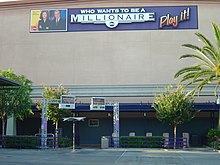 The building housing the California version of Who Wants to Be a Millionaire – Play It! after its 2004 closure.  Photograph by an anonymous user screen-named “dfan09.”

Not only are game shows still going strong on American television, with the jillions of channels available on cable TV you can watch a ton of them at all times of the day and night, including on their very own channel!  Watching shows “on demand” or using your DVR means you really do not have to miss any of them.

If you are like most Americans, there are at least a few television game shows in your catalog of shows you like to watch.  Which shows are they?  Question for students (and subscribers):  What is your all-time favorite television game show?  Please let us know in the comments section below this article.

Nedeff, Adam. Game Shows FAQ: All That’s Left to Know About the Pioneers, the Scandals, the Hosts and the Jackpots. Applause, 2018.

The featured image in this article, a photograph by Clotee Pridgen Alloc… of CBS Studios’s The Price is Right, is licensed under the Creative Commons Attribution-Share Alike 3.0 Unported license.  This image, which was originally posted to Panoramio, was automatically reviewed on 14 December 2016 by Panoramio upload bot, who confirmed that it was available on Panoramio under the above license on that date.