Tuesday, August 11
Trending
You are at:Home»Society»Crime»September 11, 2001, A Date That Will Live in Infamy!

On September 11, 2001, the fanatical Islamist terror group,  al-Qaeda, carried out coordinated attacks against the United States, resulting in the crashing of a fully occupied jetliner into the Pentagon, the hijacking and subsequent crash of another jetliner, and the crashing yet another 2 jetliners into the World Trade Center, taking down 2 of the tallest buildings in the world.  Lost were nearly 3000 innocent lives with another 6000 people injured.  About $10 billion worth of property and infrastructure was also destroyed.  For what?

Apparently misguided Islamists see the United States as an enemy of Islam, although somewhere between 3 and 10 million Americans practice Islam.  (In 2001, a study indicated at least 2.8 million Americans were of the Muslim faith.)  The terrorists of 9/11 made no attempt to spare Islamic lives when they committed mass murder, with estimates ranging from as few as 26 to as many as 1200 American Muslims (not counting the hijackers) dying in the attacks.

An Urban Search and Rescue Task Force German shepherd dog works to uncover victims at the site of the World Trade Center after the attacks.  Photograph by Andrea Booher/ FEMA News Photo.

Sadly, the dastardly attacks of 9/11 resulted in a seemingly endless war in Afghanistan, which continues to this day, costing American and Afghan lives.  The attacks also precipitated other military strikes by the US, resulting in many thousands of Muslim lives lost, and of course, the Iraq War (2003-2011), a war that has cost about 3600 American lives and as many as well over a half million Iraqi lives.  Additionally, the wars in Afghanistan and Iraq have cost American taxpayers somewhere in the area of at least $3.7 trillion (with a T) and much more than that when you calculate the interest that must be paid on unfunded wars and ongoing veteran care and benefits.  (Perhaps nearly $5 trillion.)  What a sad waste of human and monetary resources!

While the Islamic militants/terrorists that planned and carried out the 9/11 attacks might take some satisfaction in the tremendous human and monetary cost to the US (and Western allies), the incredible cost in Muslim lives, both in those killed and in disrupted living is even worse.  Did these terrorists serve the Islamic cause by their actions?  It seems highly unlikely.

A roll call opposite Downing Street.  Photograph by Southbanksteve.

(Note: We have addressed 9/11 twice previously in articles “May 10, 2013: New World Trade Center Rises from the Ashes of 9/11”  and an event unrelated to the terrorist attacks, the events of September 11, 2012, when Major Dan’s aorta blew out, “The Cleveland Clinic is the Greatest Hospital on Earth!”)

We salute the first responders that risked their lives to save victims at the World Trade Center and the Pentagon, and the brave airline passengers that prevented United Airlines Flight 93 from being used as a 4th aerial bomb.  We also want to recognize those medical personnel and therapists that have dealt with the survivors of these terrible attacks over the years since, and the sacrifices made by US and Allied military and civilian contractors since September 11, 2001, trying to keep the world safe for innocent people and rebuilding war torn countries.  It takes more than a village.  It takes an entire country, and a community of nations to maintain a world in which human beings can live and thrive.  Sadly, a few humans working against the rest can disrupt the noble goal of a peaceful and prosperous world.  The terror attacks of 9/11 are proof of that assessment. 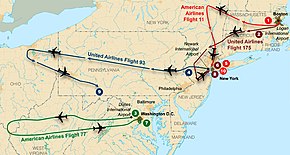 Flight paths of the four planes used on September 11.  Map by the United States Federal Bureau of Investigation.

Question for students (and subscribers): Do you believe terror is a legitimate political tool?  Please let us know in the comments section below this article.

The featured image in this article, an illustrative guide by FEMA (Page 5) to the relative positioning of the planes that caused the 9/11 disaster,  is a work of a Federal Emergency Management Agency employee, taken or made as part of that person’s official duties. As works of the U.S. federal government, all FEMA images are in the public domain in the United States. Additional media usage information may be found at https://www.fema.gov/photo-video-audio-use-guidelines.