On May 10, 2013, almost 12 years after the tragic terrorist events of September 11, 2001, a new One World Trade Center skyscraper under construction on the site of the former twin towers became once again, the tallest building in the Western Hemisphere.

When Al Qaeda terrorists hijacked airliners and flew them into the North and South Towers of the World Trade Center complex in Manhattan, New York City, sending the formerly tallest buildings in the world crashing to the ground, it was resolved nearly immediately that New York and the United States would rebuild so as not to be cowed by such dastardly deeds, showing the world the resilience and fortitude of Americans. 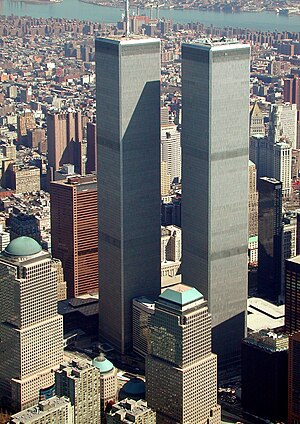 The result of this resolve was not as immediate as had been hoped, but then again building the 6th tallest building in the world is not that simple a task.  Located on the former site of 6 World Trade Center, between West St., Fulton St., Vesey St., an Washington St., the new building is rated at 104 standard floors, although only 94 actual floors exist (86 usable floors), with an additional 5 floors below ground.  This means the tippity top of the building reaches up to 1792 feet above Manhattan, (although the designed height is 1776 feet, in homage to the birth of the United States) while the highest roof is 1368 feet above the street, not coincidentally the same height as the original 1 World Trade Center.  (Methods of determining how tall a building is differs among engineers and pundits.)

Also known as Freedom Tower, 1 WTC, or 1 World Trade Center, construction began in 2006, under the Port Authority of New York and New Jersey and the construction firm of Tishman Construction.  Cost of completing the building is hard to pin down exactly, but is probably in the area of about $4 billion, making it the most expensive building in world when it was built.  Open for business in November of 2014, the skyscraper boasts over 3 and a half million square feet of floor space and 73 elevators servicing the floors. 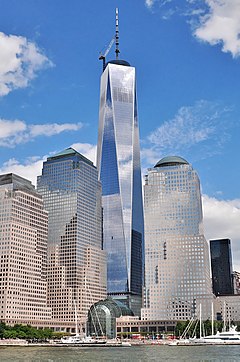 One World Trade Center, the tallest skyscraper in the Western Hemisphere

Located next door is the National September 11 Memorial and Museum, and in front of the Tower a 1 ½ scale statue of a Special Forces soldier on a horse stands as America’s Response Monument, dedicated in October of 2012.

Incredibly, for such an enormous building, the Freedom Tower is also made to be energy efficient, with integral fuel cells, electricity management, ultra-clear glass, and the waste steam from heating is used to generate electricity.

An attractive sort of pyramidal building, critics have decried the reinforced nature of the base as a blatant example of giving in to fear of new terror attacks, though many would consider such measure merely prudent.  If you find yourself in New York City, you can enjoy the scenic view from the Observation Deck, located a lofty 1254 feet up.

Question for students (and subscribers): Are super tall, gigantic skyscrapers worth the cost and effort?  Are they too vulnerable in today’s world of terror?  Please share your opinions on these subjects in the comments section below this article.