On May 15, 1970, President Richard Nixon appointed Anna Mae Hays a brigadier general in the US Army, the first female general in American military history. Anna earned a nursing degree and then joined the Army as a nurse in 1942.

A veteran of World War II (stationed in India) and the Korean War, Hays stayed in the Army and earned her masters degree. Chief of the Army Nurse Corps since 1967, after her promotion she stayed in that same position the remainder of her career.

Obviously an exceptional officer, Hays was twice awarded the Legion of Merit medal. Born in Buffalo, New York, Hays retired a little over a year after her historic promotion and is now 94 years old.

Promoted to 1st Sergeant straight from private (an unheard of leap) was just the start for Hoisington, and she was commissioned as an officer in 1943. Hoisington served in France after D-Day and stayed in the Army after the war, working her way up to commanding the WAC’s in 1965. Like Hays, when Hoisington was promoted to brigadier general she stayed at the same job until her retirement, also in 1971. Hoisington died at age 88 in 2007, and is buried at Arlington. She had earned the Army Distinguished Service Medal, the Legion of Merit, and the Bronze Star. 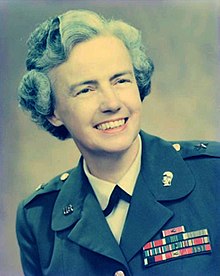 Hoisington as a brigadier general and Director of the Women’s Army Corps, circa 1970

About 350,000 women served in the military during World War II and today over 200,000 are serving currently, with 69 female generals and admirals, including 2 of 4 star rank. In 2013 and 2014, steps were taken to open previously closed fields to women, including ones that would place women in combat officially.

A cracked note: The US military is currently being investigated by Congress for rampant sexual harassment and sexual assault against female members of the military and the lack of proper handling of those cases. It is likely serious reforms will be instituted soon.

Question for students (and subscribers): Have you or any women in your family served in the military?  Please let us know in the comments section below this article.

Frank, Lisa Tendrich.  An Encyclopedia of American Women at War [2 volumes]: From the Home Front to the Battlefields.  ABC-CLIO, 2013.