On May 15, 1718, Englishman James Puckle patented his machine gun, the world’s first! You may have thought the Gatling gun or the Maxim machine gun was the first machine gun, but depending on how you define “machine gun” James Puckle, Esq. (yes, he was a lawyer) got there first.

Puckle’s invention was a flintlock, the form of firearm ignition at the top of technology of the time. It consisted of a single barrel and a cylinder pre-loaded with 11 separate firing chambers of a musket ball and powder charge in each.  Puckle intended regular musket balls for use against Christians, while for fighting Muslims a different cylinder would be used to fire special cubical bullets, which he perceived as extra deadly. 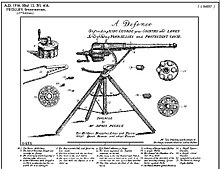 Flier for James Puckle’s 1718 patent revolving firearm, shows various cylinders for use with round and square bullets.

Puckle intended his gun to be used aboard ships as defense against enemy sailors attempting to force a boarding. Although never mass produced and certainly not a commercial success, Puckle did manage to sell a few to john Montagu (later the Master-General of the Ordnance) for use in an expedition to capture St. Lucia and St. Vincent (islands in the Caribbean Sea).  Montagu was a notorious practical joker although there is no evidence he bought the “machine guns” as a joke. 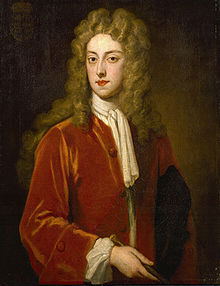 The 2nd Duke of Montagu by Godfrey Kneller, 1709

Unlike previous attempts at rapid fire guns, such as lining up many loaded barrels and firing them either all at once or one after the other, the Puckle Gun could be quickly loaded again and again by using pre-loaded cylinders. As with other efforts at rapid fire, firearms really were not suited to become machine guns until metallic case self-contained ammunition was invented.

Since Puckle’s invention did not really serve in any numbers or effectively and was not an evolutionary step in the progression of modern automatic weapons it is more of an historical curiosity rather than a milestone. There certainly are some extremely interesting firearms inventions throughout history, and the Puckle Gun is one of them. Question for students (and subscribers): Which ones do you find fascinating?  Please let us know in the comments section below this article.