On March 27, 1999, Lieutenant Colonel Dale Zelko of the US Air Force became the first pilot of a stealth fighter or bomber ever shot down, in fact, the only time a warplane with stealth capabilities has been shot down.

While flying a Lockheed F-117A Nighthawk on a bombing mission over Yugolslavia, Zelko had the misfortune of having his supposedly undetectable light bomber detected by supposedly obsolete radar systems and shot down when the Yugoslav air defense crews fired a battery of anti-aircraft missiles (probably about 5) at his plane, one of which exploded near enough to disable the airplane and force Zelko to eject. 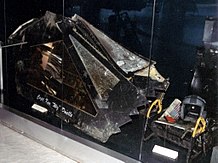 Zelko ejected safely, though with great difficulty as the plane gyrated wildly, and made a safe landing, successfully hiding from Yugoslav troops sent to search for him.  Zelko was then rescued by an American helicopter recovery team.

It turns out the Yugoslavs (Serbians) who had been bombed by the Clinton Administration and a coalition of allies for failure to comply with international mandates regarding the civil war going on in that country were smarter and more resourceful than the American military thought they were.  The Yugoslavs created fake planes and military targets for the US and allies to bomb, and hid real equipment and targets.  Their older communist bloc (Soviet) air defense radars were adapted to specifically target stealth aircraft, especially when a bomb bay was open or landing gear was down.  Zelko’s plane was detected when his bomb bay doors were open, and that is when the Yugoslavs fired a salvo of SA-3 surface to air missiles at the F-117.  The Yugoslav air defense kept their radar on for a mere 17 seconds to avoid attack by US anti-radar missiles.

Lt. Colonel Darrell Patrick “Dale” Zelko was the pilot of the downed F-117A

The United States is the only country so far to field stealthy radar defeating aircraft, largely because of expense and not just technology.  The F-117 (designated a fighter, but without any air to air capability, really a light bomber) was the first stealth plane ever fielded when it went into service in 1983.  These planes have already been retired as of 2008.

The next stealth bomber is the massively expensive Northrup Grumman B-2 Spirit,   entering service in 1997 and still serving.  These beasts can carry a max bombload of 50,000 pounds and cost somewhere between $750 million and over $2 billion apiece, depending on how the price is computed.  Only 21 have been built due to the cost.  (Note: The Rockwell B-1 Lancer heavy bomber went into service in 1986, with a somewhat stealthy nature, but not of the extent of the other planes mentioned here.)

The US has continued to spend ludicrous amounts of money on stealthy airplanes, with the Lockheed Martin F-22 Raptor leading the charge to the bank at between $150 million and over $300 million apiece (again, depending on how you count expenses).  Originally, hundreds of these most capable fighter planes of all time were planned, but only 187 operational units have been built, due to expense and lack of a clearly defined need.  The F-22 is easily the most capable fighter ever built, and yet problems with the pilot oxygen delivery system have forced pilots to avoid certain maneuvers.

Finally, the ultra-versatile Lockheed Martin F-35 Lightning II has been injected into the mix, with a single seat and single engine, built in 3 different versions for the Air Force, Navy, and Marine Corps (a vertical take-off and landing variety similar to the Harrier jump-jet).  The F-35 is a “bargain” at only $100 million per plane, although the program is $163 billion over budget (which means the actual cost per plane is probably much higher) and has been heavily criticized because of the cost.  The F-35 program is the most expensive military program in history.  So far 200 F-35’s have been built, with several hundred more hoped for (over 400 for the USMC alone) to equip both the US and allied air forces.  Problems with systems reliability and constant upgrades as technology advances have slowed procurement and greatly raised the costs.  The F-35 comes in 3 varieties, an Air Force version, a vertical take off and landing version for the Marine Corps, and an aircraft carrier capable version for the Navy. 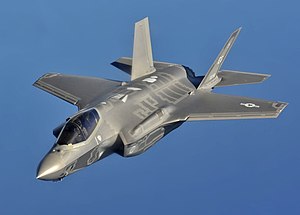 Question for students (and subscribers): Are these stealthy planes worth the cost?  Please let us know in the comments section below this article.  On the surface, you would think the pilots would say YES!  What you may not be considering, is the modern drone technology that means pilots may not really have to fly into harm’s way to deliver bombs that are guided by satellites or GPS anyway.  Plus, stand-off weapons such as cruise missiles keep the plane out of the target area as well.  Adding up all the factors is quite complicated and defies any short answers.  Only by careful evaluation of all the risks and rewards can a decision about which systems to buy be made.  We wish the government and military bean counters good luck in making the best choices!

The featured image in this article, a photograph by user Marko M of the canopy (left) and ejection seat and pilot’s helmet and survival gear (right) from the F-117 shot down on March 27, 1999, near village Budjanovci, Yugoslavia, is licensed under the Creative Commons Attribution-Share Alike 3.0 Unported license.