Wednesday, April 1
Trending
You are at:Home»Society»Crime»March 26, 1998: 32 Babies and Toddlers Chopped Up With Axes in Algeria!

On March 26, 1998, in the Algerian town of Oued Bouaicha, 15 guerilla fighters of an anti-government Islamic group used knives and axes to chop 52 people to death, including 32 babies and toddlers less than 2 years old. Various Islamic rebel groups had committed and continued to commit massacres such as this from 1991 to 2002 in protest of a government coup against an election victory by The Islamic Salvation Front, Islamic extremists eager to create an Islamic state in Algeria.

On the same day as the Oued Bouaicha Massacre, another massacre claiming 11 lives took place in Youb. Unfortunately, these massacres are not aberrations, but were a regular occurrence during the Algerian Civil War, with dozens of reported and unreported incidents. 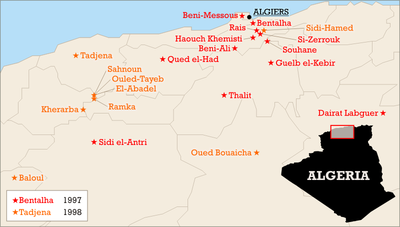 One of the main group of perpetrators of such killings was the radical and hard line Armed Islamic Group (GIA), and another not quite so radical group involved was the Islamic Armed Movement (MIA). Yet another was the Islamic Salvation Army (AIS) which formed from the MIA.

The GIA, probably the most bloodthirsty of the factions, also fought with other Islamist groups, and sometimes massacred entire neighborhoods deemed loyal to the other groups. A total of how many people died in these massacres is unknown, but may be in the tens of thousands, with an also ambiguous total number of people killed in the Civil War estimated at a few tens of thousands to as many as 200,000.

After 10 years of fighting and massacres, the GIA lost cohesion and a sort of peace finally ensued, with key elements including an amnesty for those no longer fighting and reparations for families of those killed by the government. Stubborn radicals kept up the struggle, but only in small numbers, as few as 300. A state of emergency remained in effect until 2011.

A key factor in the victory by the secular government was the loyalty of the Army, with a tradition of Algerian nationalism since the hard won Independence from France 1954-1962. Today Algeria is an Arab country that mostly practices Sunni Islam, and has just over 40 million people.

Question for students (and subscribers): Where in the Quran does it say to chop up babies and toddlers with axes? Especially Moslem babies and toddlers? Of course it does not, and this massacre is one more example of religion being twisted into something most evil. What can be done to prevent future instances like the massacres of the Algerian Civil War? Please let us know if you have any solutions in the comments section below this article.

The featured image in this article, a map uploaded by Electionworld from en.wikipedia.org of massacres of over 50 people in 1997-1998, is licensed under the Creative Commons Attribution 2.5 Generic license.