Friday, June 5
Trending
You are at:Home»March»March 31»March 31, 1992: Last of the Iowa-Class Battleships, the USS Missouri, Retired

On March 31, 1992, the U.S. Navy decommissioned the USS Missouri, the last of the Iowa-class battleships.  The Mighty Mo, also known as BB-63, gained immortality by being the host for the signing of the Japanese surrender in World War II on September 2, 1945.  The fact that President Truman was from Missouri probably had some influence on the choice of the ship for the signing!   The Missouri now resides at Pearl Harbor, Oahu, Hawaii as a museum/memorial ship.

First fielded during World War II, the Iowa class was an improvement over the South Dakota and North Carolina-class ships that had been the U.S. Navy’s first fast battleships with 16-inch main guns.  The Iowa class ships were not only fast, going 32-35 knots depending on load, and well armored, with 12-inch belt, 19.7-inch turrets, and 7.5-inch deck armor, but also with the superb 16-in 50 caliber rifled main guns (9 guns in 3 turrets), They were the most effective battleship guns ever built.  Capable of firing a 2,700-pound anti-armor shell whose solid steel nose cone could penetrate the armor of any other battleships ever built meant they were the match of the larger Japanese 18-inch guns on the Yamato class.

The mighty Bismarck and Tirpitz of the German Navy did not have quite the speed and only a little over half the range of the Iowas.   Although heavily armed with anti-aircraft weapons, the superb British King George V class ships (5 of them) were likewise not as fast, had less armor and were only armed with 14-inch main guns, meaning they still did not quite match the mighty Iowas.  The HMS Vanguard, Britain’s last battleship, was not built in time for WWII action and still only had 15-inch guns.

The Japanese Yamato class, consisting of the Yamato and the Musashi, were by far the largest, most heavily armored battleships ever built and sported the biggest guns ever mounted on a ship (18-inch guns firing a 3,000-pound shell).  A good 5 knots slower than the Iowas, these leviathans only had half the cruising range of the Iowas.  Furthermore, their radars were not up to American standards, and they lacked the massive amount of light (40 mm and 20 mm) anti-aircraft cannons the Iowas bristled with. 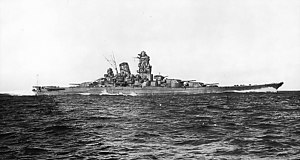 Speaking of anti-aircraft defense, another notable feature of the Iowa-class ships was their excellent anti-aircraft weaponry, notably 20 x 5 inch rapid firing guns in 10 twin gun turrets firing proximity fused flak shells.  For closer engagements, these ships were outfitted with 80 x 40 mm Bofors cannons and 49 x 20 mm Oerlikon cannons, making them capable of putting up a wall of fire no other ship could match.  Radar control made these guns quite effective, even at the longest ranges.

Retired after World War II, all 4 Iowa class ships (the USS Iowa, New Jersey, Missouri and Wisconsin) were brought back for duty during the Korean War, and the New Jersey was brought back for use during Vietnam, incredibly firing 7 times more shells at Vietnam than she had fired in all of her WWII service.

President Ronald Reagan recommissioned  all of the ships again the 1980’s as Cold War centerpieces, had them updated with surface-to-air missiles, Harpoon and Tomahawk anti-ship and anti-land cruise missiles and gave them sophisticated anti-missile defenses.  By this time, no anti-ship weapons in the Soviet armory were likely to be effective against such heavily armored ships, and tests after WWII had proven that even nukes had a hard time sinking battleships.

After ill-considered and unauthorized experimentation with gunnery had caused an accident on the Iowa, the 4 great battleships were finally retired for good after service in the Persian Gulf in Desert Storm in 1991.  Or were they?

Question for students (and subscribers): Should the Iowa class battleships be brought out of mothballs and recommissioned for service today?  Please let us know in the comments section below this article.

The featured image in this article, USS Missouri at sea in her 1980s configuration, is a work of a sailor or employee of the U.S. Navy, taken or made as part of that person’s official duties. As a work of the U.S. federal government, the image is in the public domain in the United States.