Monday, August 3
Trending
You are at:Home»June»June 14»June 14, 1954: President Signs Controversial “Under God” into Pledge of Allegiance

On June 14, 1954, Flag Day that year, President Eisenhower signed a joint resolution of Congress amending the 1942 Flag Code, adding the words “under God” to the Pledge of Allegiance.  The president had only recently been baptized a Presbyterian and was apparently in a religious feeling when he declared “the dedication of our nation and our people to the Almighty.”

Not surprisingly, not everyone agreed.  The backdrop to this issue was the Cold War, the struggle of atheistic communism against “Christian” democracy and capitalism.  Eisenhower and Congress clearly wanted to differentiate us from them. 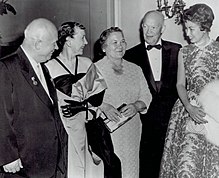 Many people already were against the Pledge of Allegiance on religious or philosophical grounds.  Jehovah’s Witnesses thought the saying of the Pledge to the Flag was a form of idolatry.  Forcing schoolchildren to  recite the Pledge in the classroom was a breach of religious freedom, they said.  Making a provision where the non-pledgers could silently sit or stand without reciting the Pledge was unacceptable because of the ostracism sure to come down on the children not saying the pledge from the other kids.

Additionally, constitutional purist have always objected to the Pledge on the grounds that in a democracy based on dissent people should not be saying an oath of loyalty.  That seemed too much like the totalitarian states with all their pledges, oaths and affirmations.  The First Amendment should prohibit forcing certain speech just as it allows free speech.  Again, the argument against having school children say the Pledge and allowing “dissenters” to remain silent was considered unacceptable because of the peer pressure sure to follow.

Obviously, atheists and polytheists objected (and continue to object) to any sort of official endorsement of the Pledge of Allegiance with the “under God” phrase as a state endorsement of monotheism, something prohibited in the Constitution.

In spite of all the objections, 45 states officially allow time in the school day for children to recite the Pledge, but not all those states require it to be recited, leaving that decision to local policy, and sometimes to the teacher’s discretion. 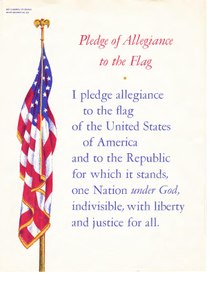 The Pledge of Allegiance was composed in 1892 and became popular with many organizations enthusiastically promulgating it.  It was modified in 1922, 1923, 1924 and officially adopted by Congress in 1942 (the name adopted in 1945).  The next change came in 1954 with addition of the “under God” phrase.  If you thought the Pledge was somehow sacred and immutable, guess again.  It can be changed just like anything else.  The arguments against dropping the “under God” phrase usually include “tradition” and the like, when in fact “traditionally” the phrase was not present.

Question for students (and subscribers): Should the “under God” phrase be kept or dropped?  Should school kids be forced to recite the Pledge?  Tell us what you think in the comments section below this article.

Raymond, Tricia.  Saving One Nation Under God, The Role of the Pledge of Allegiance in America’s Fight Against Socialism.  Sametilon Publishing Co., 2011.