10 Favorite Foods and Drinks Named After a Place

On June 14, 1789, the Rev. Elijah Craig first distilled whiskey from maize (corn).  Since he was living in Bourbon County, Kentucky, he called his creation Bourbon.  Many foods and drinks derive their name from where they were invented or made popular, or for whatever reason were named after a city, region, or country.  Here we list 10 of the most popular of these “place named” foods and drinks.

Going back to around 1900 or so, legend has it that this salad dressing and sandwich topping was made in the 1000 Islands Region of the St. Lawrence River on the border of Canada and the US.  It became popular in the 1950’s and is fundamental to recipes such as the “Reuben” sandwich.  Some claim McDonald’s Big Mac sauce is a form of 1000 Island Dressing.

Unofficially known as “bleu cheese,” we discussed this wonderful cheese in our discussion about the best things from France.  Obviously, this cheese comes from the Roquefort region of France and only bleu cheese from there can be called Roquefort.

Also known as “Philadelphia Cheesesteak” or variations of that, this great sandwich was invented by Pat and Harry Olivier (in Philadelphia of course) around 1930.  Thinly sliced steak covered in melted cheese (provolone preferred), onions, peppers, mushrooms, a bit of mayonnaise, perhaps some ketchup or any combination of the above on an Italian roll, served hot.  Food of the Gods!

Notice the spelling of “whisky.”  Normally we spell the word “whiskey,” but for Scotch it is different.  Made in accordance with the laws of Scotland, this is grain whisky made from wheat, barley, or rye.  Single malt means an unblended whisky made from barley malt, while versions made from single grain, blended malts, blended grain, or blended whisky are also offered.  Scotch is aged in wooden barrels for a minimum of 3 years and has been made since about 1495.  Many drinkers will only drink Scotch and consider all other whiskey a cheap imitation. 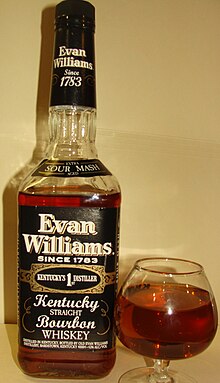 A distinctly American product (from Bourbon County, Kentucky), Bourbon is made from a minimum 51% corn and is aged in charred oak barrels, but without a minimum aging period.  To be called “straight Bourbon” the whiskey must be aged at least 2 years.  Bourbon labeled “blended” may have coloring and neutral spirits added.  Bourbon does not have to originate in Kentucky, but distillers in other states usually do not call their product Bourbon even though it is made in that manner.  (Note: ranking Bourbon ahead of Scotch is strictly a personal opinion.  If you disagree, let us know why.)

Deriving its name from its original birthplace, Pilsen, Bohemia, Czech Republic (Plzen), this beer was developed in response to public dissatisfaction with the beer being produced there in 1839.  The city built a city owned brewery and produced a pale lager beer known as Pilsner.  Pilsner is a clear golden beer that was a hit with beer drinkers then and now.  Today the original beer is still produced and you can buy it under the brand name Urquell.  This is a light, crisp, refreshing beer, the model for most beer now made. 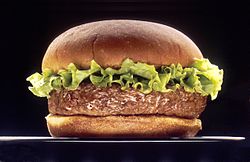 Exactly when and where the hamburger was invented is debatable, but the name comes from Hamburg, Germany, the second largest city in that country.  Popularized in the United States starting around 1900, the big break came at the 1904 St. Louis World’s Fair.  White Castle (1921) was the first major retailer of the essential American sandwich.  H&H fact:  During World War I the name was changed to “Salisbury Steak” as an anti-German ploy.

Sausage from Frankfurt (Germany) and also known as “wiener” (“wien” being the local word for Vienna, hence “Vienna sausage”).  Popularized in the late 1800’s in the US as a sandwich, the bun supposedly came from customers walking off with the glove they were given to hold and eat a hot sausage.  Bun instead of glove, end of problem!  Of course, there is also the term, “Dachshund sausage” where the “hot dog” was named after the dog it resembles.  The first famous retailer of frankfurters was Nathan Handwerker, the Polish-American founder of Nathan’s Famous hot dog restaurant.

Actually originated in Belgium (disputed by the French who claim the invention for France), the fried treat got the name French Fries after being called “potatoes made in the French manner.”  Thomas Jefferson is said to have eaten them in 1802, they appeared in a cookbook in 1856, and by 1900 the term “French fried” was applied to other deep fried foods as well (such as onion rings).  As tasty as they can be, unfortunately fries have become a staple food in the diet of many Americans.

Probably the food or drink most associated with its place of origin, the bubbly wine has been a delight since the 1500’s.  Traditionally attributed to Benedictine Monk, Dom Perignon, other countries produce sparkling wine from Champagne style grapes, but most call their product by other names.  Millions of people have toasted the New Year or a newly married couple with Champagne.  Sports championships are celebrated with Champagne as well, which is kind of what we call “a clue.”

Question for students (and subscribers): Which ones would you add to the list?  (Daquiri? Manhattan? Chicago-Style Pizza?)  Please let us know in the comments section below this article.