On May 20, 2017, the entire planet is obligated to celebrate World Whisky Day, and if you have any questions about the legitimacy of this holiday, understand that there is a web site dedicated to this particular day!

Whisky, spelled without the “e,” is what we call the distilled malt alcoholic beverage from Scotland.  In the United States of America, we call similar stuff “whiskey” with the “e,” but either way, you could call it hooch, firewater, liquor, spirits, moonshine, rot gut, white lightning, acqua vitae (water of life) or mountain dew (not the soda pop!), it like a rose, would smell as sweet. 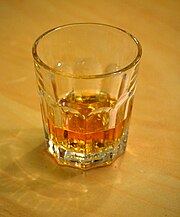 A glass of whisky

Whisky is made from fermented grain mash, and can be made from corn, barley, rye, or wheat, usually aged in white oak barrels after distillation.  This means other types of alcoholic beverages made from fruits, molasses, and other ingredients is not whisky (including rum, tequila, mezcal, ouzo, gin, vodka, etc).

Malt whisky is made from malted (sprouted) barley, and grain whisky is made from the other grains.  Scotch Whisky is of course made in Scotland, and is double distilled, sometimes even distilled up to 20 times, with a minimum aging time in casks of at least 3 years.  To be called Scotch, the whisky must be of the highest quality.  Bourbon is whiskey made in the United States out of corn mash, and is also aged in oak casks.  Bourbon is generally associated with the State of Kentucky, though other States may produce whiskey referred to as Bourbon. 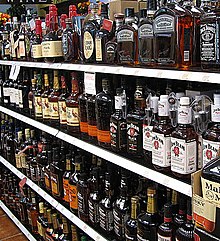 A selection of Bourbons and Tennessee whiskeys offered at a liquor store in Decatur, Georgia

The most expensive whiskey/whisky is usually a “single malt Scotch” or a “straight” or “bonded” bourbon.  These whiskies are made in single batches and are not blended with other batches, giving each batch its own unique flavor.  Cheap bourbon may be aged as little as 3 months in casks, while “straight” bourbon is aged a minimum of 2 years.  This straight bourbon must be labeled with it aging time if less than 4 years, and cannot have flavorings or colors added.  Blended bourbon may have colorings and flavorings, as well as additional whiskey batches added, but must have at least 51% straight bourbon in it.

Bonded whiskey is in compliance with the 1887 law, Bottled-In-Bond Act, be made from one distillery, aged at least 4 years, and be at least 100 proof.  The stuff has to be made during a specific season as well.  Likewise, to be labeled “Single Malt Scotch” a whisky must comply with Scottish law, including being made at a single distillery from malted barley, made in a pot still and aged a minimum of 3 years and 1 day.

A 750 ml bottle of J.T.S. Brown Bottled in Bond Kentucky bourbon whiskey. Note the writing in the red banner.

Of course, other places make some pretty good whiskey of their own, including Japan, Canada and Ireland, and are unimpressed with Scotland and the US.  As with most things, it is a matter of personal preference.

Whiskey is a favorite drink, world-wide, with an annual consumption of 467.4 million cases.  Not that you would guess, but the country that consumes the most whiskey annually is India, with 1.4 billion liters of liquid fire going down the hatch, more than triple that of #2 United States!

An advertisement for Bagpiper whisky on a building in Pondicherry

Question for students (and subscribers): What is your favorite whiskey/whisky?  Share your thoughts on the subject in the comments section below this article, and na zdrowie!