10 Great Immigrants to the United States

Sikorsky designed several successful aircraft while an American, including the famous S-42 “Clipper” flying boat, the original Pan Am Clipper.  The aircraft company he founded in 1925, Sikorsky Aircraft Company, is still in business today, owned by Lockheed Martin.

Obviously, in this day where xenophobia is causing panic about immigrants, legal and illegal, and Donald Trump has based a successful run at the Republican nomination for President by bashing immigrants, it may be nice to remember that all Americans were once immigrants, even the “Native Americans” (aka, Indians) who themselves traveled from Asia.  Here we list some immigrants to the United States that we are darn glad they made the trip.  (Sorry Justin Bieber, maybe some other list.)  We will discuss athletes that emigrated to the US at a later date.

Inventor of the helicopter, designer of airplanes, founder of aircraft company.  See account above.

This Ukrainian-French Canadian has hosted the Jeopardy television game show since 1984 and has done a wonderful job of it in the footsteps of Art Fleming.  Trebek’s father emigrated to Canada from the Ukraine. ( Note: Canada has given us so many wonderful people you could fill a few books naming them.  Honorable mention, Leslie Nielsen.)

Fermi fled Italy in 1938 to avoid persecution of his Jewish wife and lent his brilliant mind to the American atom bomb project, creating the first nuclear reactor in history (made by humans!).  He is considered essential to the development of the atomic bomb and it is frightening to think what may have happened had he been working for Italy and Germany instead of the US during World War II.

The famous naturalist and environmentalist founded the Sierra Club and is responsible for much of the natural preservation of American wild spaces, including Yosemite Valley and Sequoia National Park in California.  Muir came to the US in 1849, and both my boys attended John Muir Elementary School in Parma, Ohio.

Moving to the US in 1990 allowed the then 7 year old Kunis to blossom into a major movie star and voice of the animated cartoon character Meg Griffin on Family Guy.  Married to actor Ashton Kutcher, Kunis is beautiful and adorable, and apparently a decent actress sporting a Golden Globe Award and SAG Award to her credit.  Of course, many actors and other entertainers are immigrants to the US, but Kunis was chosen by the author for her wholesomeness and likeability.  She made theForbes list of 100 Powerful Celebrities in 2013.

Born Jean Rabin and later renamed Jean-Jacques Audobon, the man that would become synonymous with the study of birds came to the US in 1803.  His famous book, Birds of America, is often considered the finest such work ever completed.

The designer of the V-2 rocket for Nazi Germany during World War II, von Braun wisely chose to cooperate with the Americans after the war and became the main force behind America’s advance into the Space Age.  NASA refers to him as “The greatest rocket scientist in history.”  Without him, the 1969 Moon Landing probably would not have happened.

Born Karl August Rudolph Steinmetz, this brilliant scientist was a dwarf and a hunchback, the kind of person anti-immigration people might stupidly deny entry to.  His work with electrical production and motors complimented the work of Tesla and his other work made engineering electrical devices much easier.  He fled persecution for alleged Socialist activity and came to the US in 1889. 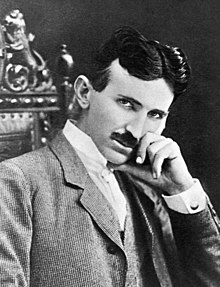 Tesla came from what was then the Austrian Empire in 1884 by way of France, and gave us the winning side in the AC vs. DC electrical debate with Thomas Edison,  His genius made the hydroelectric grid possible, and of course, some nifty special effects for movies.  His AC Induction Motor makes all our electrically powered tools and appliances possible.

One of the most famous scientists of all time and often regarded as the or one of the smartest humans in history, Einstein elected to become an American in 1933 when the Nazi regime took over Germany and began a mass pogrom against Jews.

Question for students (and subscribers): Who is your favorite immigrant to the United States of America?  Please let us know in the comments section below this article.