On June 16, 1944, 14 year old George Stinney was executed in the electric chair by the State of South Carolina, giving him the distinction of being the youngest American executed in the 20th Century.  Stinney had been convicted of murdering 2 girls, age 11 and 8.

Not surprisingly, the murderer was an African-American boy and the victims were Caucasian girls.  No physical evidence was presented implicating the young man, and his conviction rested only on the fact that he had spoken to the girls shortly before their murders.  In 2014, 70 years after his death, Stinney’s convictions were vacated.

The dubious prosecution started with threats of lynching of the Stinney family, causing the family to flee the area and leaving George alone in police custody.  Police testified in court that Stinney had confessed to the crimes, but no record of his alleged statement was made and no recording was taken.  Stinney’s court appointed lawyer did not even challenge the police in court!

Not surprisingly, the jury found Stinney guilty in only 10 minutes.  Stinney’s lawyer had not even called a witness.  The entire trial (even with jury selection) was wrapped up in 1 day.  A booster seat was used for the diminutive teenager, and the too large face mask came off during the execution, revealing a tearful and contorted face while Stinney was electrocuted.  From the time of the murder to the time of execution only 83 days had passed.

Activists in the 21st Century worked to clear the boy’s name, and in 2014 were finally successful.  Of course, with a dead kid on the conscience of South Carolina, that was little cause for celebration.  This case being only 1 of many where the executed person or condemned person awaiting execution is later found to be not guilty of the crime for which he (or she) was condemned has given serious pause to advocates of capital punishment.  These miscarriages of justice go all the way back to colonial times (such as the Salem Witch Trials).  Minors often are intimidated into giving false confessions (adults, too, at times) due to harsh interrogation and the mistaken belief that confessing will ease their immediate situation.  Irregularities, to say the least, have been found in dozens of capital cases.

Fanciful representation of the Salem witch trials, lithograph from 1892

If someone is old enough to choose to murder another person, should the murderer be killed?  Where do you draw the line?  After all, the choice of 18 years old as an “adult” in the United States is arbitrary anyway.  We do not let 18 year olds buy guns or alcohol, and yet we consider them liable for decisions such as murder?  Old enough to vote and serve in the military, but not old enough to buy a beer.  That is whack!  Some sort of consistency seems to elude us.

We have 2 big issues here, the first being whether to have a death penalty at all, and the second whether or not age or mental clarity should be a factor in sentencing.  Question for students (and subscribers): Please share your ideas about the death penalty overall and the age a person could be executed.  We also welcome your opinion about executing retarded or mentally ill (insane) people.   Please let us know in the comments section below this article. 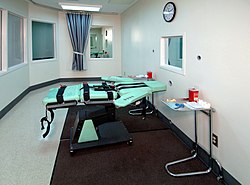 Execution room in the San Quentin State Prison in California