Tuesday, August 11
Trending
You are at:Home»Arts & Entertainment»Literature»Frightening Friday: The Nightmare of the Baby Head, Chapter 1

What follows is (as far as we are aware) a work of fiction written several years ago by a young lady interested in the supernatural in the style of the stories found in Scary Stories to Tell in the Dark (1981) or a more modern creepypasta.

Digging Deeper: Full text of Chapter 1 of The Nightmare of the Baby Head

“Hi Mom,” said Jack, a 6-year-old who loves to play with Barbies.

“No,” said Jack, “I’m going upstairs in my room to play with my Barbies.”

“Okay,” answered the mom frowning because Jack has a problem with Barbies. 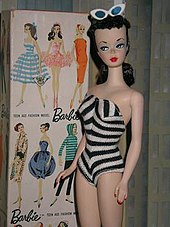 The first Barbie doll was introduced in both blonde and brunette in March 1959.

Later, when Jack was playing in his room, he heard something say, “Play with me; I’m better than barbies.”  The voice came from his closet.

Freaking out, Jack asked, “Who are you?”

When Jack opened the closet, nothing unusual was there.  There were only clothes.  On the floor, however, was a big baby head that went unnoticed.  Thinking he must have just imagined the voice, he was no longer scared and instead felt a bit silly.  When he closed the closet door, nothing of any interest happened.

“What?!?!?!?” exclaimed Jack as a sudden rush of confused terror overtook him.

When the mom left after telling Jack she was joking around, he heard something again: “Hi!  Play with me!”

Then, after the closet opened, Jack saw a baby head floating in the air!!!!!

In the morning, the mom came in to wake up Jack, but when she walked in… Jack wasn’t in his room, but there was the baby head on the floor.

I am a Biology major from Cleveland, Ohio. In high school, I participated in many clubs, extracurricular activities, and a variety of community services. I continue to be outgoing at John Carroll. In my spare time, I am a tutor and socialize with my friends. I also enjoyed interning at two medical offices in the summer, and was a SWAT leader for fall 2017. I plan on pursuing a career in health care.