On December 11, 2017, New York City once again became the target of an Islamic radical terrorist, this time an immigrant from Bangladesh.  Luckily, the pipe bomb used in the attack did not explode properly, leaving the suspect with minor injuries (burns) and 3 innocent people with “headaches and ringing in the ears.”  It could have been so much worse!  President Trump acknowledged the incident as justification for his anti-immigration platform, saying, “There have now been two terrorist attacks in New York City in recent weeks carried out by foreign nationals here on green cards. The first attacker came through the visa lottery, the second came through chain migration. We’re going to end both of them.”  President Trump had been heavily criticized for railing against Islamic and Hispanic immigrants that he claims come to the United States in order to commit crimes, as well as his efforts to stifle immigration from Muslim majority countries.  The bungled New York Subway Bombing of 2017 only added fuel to his fire, although statistics indicate immigrants, even illegal immigrants, commit fewer crimes than natural born American citizens.

The suspect was identified as Akayed Ullah, a 27 year old man from Bangladesh and an adherent to the Salafi brand of Islam.  Ullah left his wife and children in Bangladesh to legally come to the US, finding work as a cab driver.  A radical Islamist that claimed he had attempted his crime for a variety of anti-American reasons, including protesting US military involvement against Muslims, the US announcing the planned move of the American embassy in Israel to Jerusalem, as well as solidarity with Al Qaeda in Bangladesh and ISIS.  Some of the statements Ullah made to the police, on Facebook or in written notes include, “I did it for the Islamic State.”, “Trump you failed to protect your nation”, and “O AMERICA, DIE IN YOUR RAGE.”  Ullah suffered burns on his hands and body from the fizzled explosion of a pipe bomb he had constructed from Christmas lights and sugar with a battery detonator.  Ullah told law enforcement authorities that he had learned bomb making on the internet while following ISIS related web sites.  He also told investigators that he had chosen a Times Square area subway station for his attack because of the plethora of Christmas decorations in the area.  Ullah is known to have frequented a Brooklyn mosque that has been under police surveillance for over a decade. 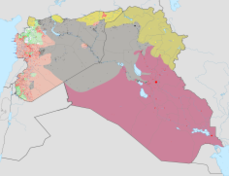 Territory, in grey, of the Islamic State of Iraq and the Levant at time of its greatest territorial extent (June 2015).

Ullah was able to permanently immigrate to the US via his uncle having won a diversity visa lottery which enabled the uncle to bring other family members to the US as well.  The law that made Ullah’s legal immigration possible is the Immigration and Nationality Act of 1965.  This law and others are the targets of President Trump, who decries the “chain” immigration in which family members are allowed to vouch for other family members to bring those others to the US.  (Apparently President Trump has forgotten his first and third wives and mothers of his children were immigrants from foreign countries!)

Found guilty on all counts in November of 2018, Ullah is scheduled to be sentenced in April of 2019, with Life in Prison being the maximum possible sentence.  Ullah’s family members in the US have been placed under close observation, and no connection to Bangladeshi terrorist cells has been established.  The Bangladesh government strongly denounced the terrorist attack.  The US had many prominent citizens, politicians and celebrities that had supported the Bangladesh independence movement and war for independence from Pakistan 1971-1974, including the famous staging of The Concert for Bangladesh, produced by ex-Beatle George Harrison and Ravi Shankar, coincidentally held in New York City (Madison Square Garden), making attacks on the US and New York in particular by a Bangladeshi person kind of ironic.  (The Concert for Bangladesh was the first benefit concert in history.)

Cover of the 2005 reissue of the Concert for Bangladesh DVD

Question for students (and subscribers): Why would Akayed Ullah come to the US in advance of his family only to conduct an apparent suicide bombing?  Should the US be able to limit the immigration of people based on nationality or religion?  Were you familiar with The Concert for Bangladesh?  Should Ullah’s other relatives in the US be deported?  Are you familiar with Salafism?  Please let us know in the comments section below this article.

The featured image in this article, a photograph from Manhattan by The All-Nite Images from NY, NY, USA of the passage between the 7 and 8 Ave Subway lines at Times Square near where the bomb detonated, pictured in 2014, is licensed under the Creative Commons Attribution-Share Alike 2.0 Generic license.