Wednesday, February 26
Trending
You are at:Home»April»April 29»Are Canary Birds from the Canary Islands?

On April 29, 1483, the Kingdom of Castile captured the main island of the Canary Islands, Gran Canaria, leading to Spanish ownership of the islands to this day.  Consisting of many smaller islands as well as the 7 “main” islands, the largest island is Tenerife, and Gran Canaria is the third largest island with an area of 600 square miles.  (For comparison, Cuyahoga County, Ohio, home to Cleveland, has an land area of 457 square miles, and Cook County, Illinois, home to Chicago, has a land area of 945 square miles.  With 596.7 square miles of land, the Hawaiian island of Oahu is almost exactly the same size as Gran Canaria.) 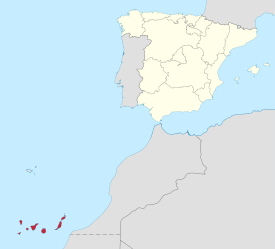 Location of the Canary Islands within Spain.  Map by TUBS.

Located only about 62 miles off the Northwest coast of Africa (Morocco being the closest African country), the Canary Islands are geologically part of Africa, and today are some of the farthest parts of the European Union from the actual continent of Europe.  The Canary Islands, sometimes called “The Fortunate Islands” in olden times, are often seen as a waypoint in traveling between Europe and Africa or Africa and the Americas, especially in the days of sail and during early aviation years.  Tourism is a major industry and around 12 million tourists visit the islands each year, mainly to enjoy the beaches.  In fact, tourism is the largest industry in the Canaries, accounting for about 32% of the economy.  Construction and agriculture are also important economic forces.  The Canaries are home to 2 major astronomical observatories, the Teide Observatory (Tenerife) and Roque de los Muchachos Observatory (Las Palmas).

Since 1927, the Province of the Canary Islands has been split into 2 provinces, Santa Cruz de Tenerife and Las Palmas.  Las Palmas de Gran Canaria is the largest city in the islands, with a current population of about 384,000 people.  The entire island chain is home to over 2.1 million people.  Over 1.7 million of the population of the Canaries reside on the islands of Tenerife and Gran Canaria.  About 85% of the population claim to be of the Catholic faith, and almost the entire population is of European or North African descent, with a considerable number of immigrants from Latin American countries. 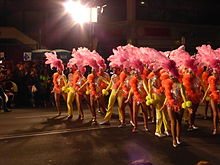 The Canary Islands are also famous for a terrible airline related disaster that occurred on March 27, 1977, when 2 Boeing 747 jetliners taxiing on the runways at Los Rodeos Airport (Now called North Tenerife Airport) on the island of Tenerife collided with each other , resulting in 583 fatalities and 61 people injured, the deadliest aircraft accident in aviation history (although the planes were not flying at the time of the incident).

So what about the dogs?  The islands derive their name from the Island of Gran Canaria, which in turn derives its name from the Latin words Canariae Insulae (“Islands of the Dogs” in English).  Apparently a large quantity of large dogs were living on the Island of Gran Canaria when Europeans first encountered the place, leading to the familiar name.  Or perhaps the name comes from a native people of Morocco, the Nukkari Berber, who were called “Canarii” by the Romans.  Or then again, the name might have stemmed from the original inhabitants of the islands (called Guanches) who were believed to worship dogs, going so far as to mummify their canine idols, possibly with a connection to the Egyptian God, Anubis, he of the distinctive dog shaped head.  The Guanches may have referred to themselves as “Canarios” to the Spanish, yet another possible source for the name of the islands.  In any case, the coat of arms of the Canary Islands does feature the eponymous dogs, one big Labrador Retriever-looking dog reared up on each side of the shield.  An actual dog breed associated with the Canary Islands is the Presa Canario, a large (80 to 100 pounds or more) Mastiff-like dog sometimes called “The Canary Dog.”  Despite its size and fierce appearance, the Presa Canario is allegedly a docile pet and fine family companion.

As for the Canary birds?  Those little yellow songsters are indeed from the Canary Islands, but it is the birds that get their name from the islands, not the other way around.

Questions for Students (and others):  Have you ever been to the Canary Islands?  Have you ever owned a Canary bird?  Have you owned or seen a Canary Dog?  Please let us know in the comments section below this article.

Map of the Canary Islands.  Map by Oona Räisänen (Mysid).

Galindo, Juan. The History of the Discovery and Conquest of the Canary Islands: Translated from a Spanish Manuscript, Lately Found in the Island of Palma. with an Enquiry Into the Origin of the Ancient Inhabitants. Gale Ecco, 2018.

The featured image in this article, a photograph by Juan Emilio from Las Palmas de Gran Canaria, España of a juvenile Canary on Gran Canaria, Canary Islands, Spain, is licensed under the Creative Commons Attribution-Share Alike 2.0 Generic license.  This image, originally posted to Flickr, was reviewed on August 5, 2011 by the administrator or reviewer File Upload Bot (Magnus Manske), who confirmed that it was available on Flickr under the stated license on that date.