Saturday, January 25
Trending
You are at:Home»Lifestyle»Fashion»Another 5 Types of Clothing Named After a Place

On September 25, 2019, we make good on our promise to readdress the subject of Types of Clothing Named After a Place, a follow up to our article of September 22, 2019.  Today we will list yet another 5 types of clothing or material named after a city, country, region or other such named place.  Be sure to tell us some of the many clothing, shoes, hats, material/cloths and other bodily adornments we have neglected so far.

An article of clothing associated with the Victorian and Edwardian Eras; this rough cloth overcoat is characterized by having a cape over the shoulders that further protects the arms from the weather.  Moderately different from the “Inverness Coat,” this foul weather icon is often portrayed in films about the Victorian Era.  Naturally, the lightweight version is called the “Ulsterette.”  The name derives from “Ulster,” a common synonym for the 9 counties that comprise Northern Ireland, presumably for the often challenging weather found there.  As the 20th Century wore on, the Ulster Coat lost its signature cape. 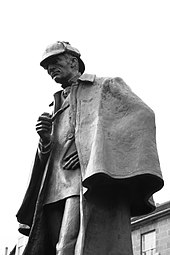 Statue of Sherlock Holmes in an Inverness cape and deerstalker, at Conan Doyle’s birthplace in Edinburgh.  Photograph by Siddharth Krish.

Named for yet another dreary (sorry, to those of us in the Sunny USA Great Britain is somewhat dreary, weather-wise!) British land, the Inverness coat also boasts a cape, though a longer cape than that of the Ulster.  Additionally, the cloth on a modern Inverness coat may well be nylon or some other synthetic instead of the traditional tweed or houndstooth type fabric.  The Inverness is an all-weather type coat, somewhat akin to a modern trench coat. The larger cape of the Inverness provides protection against rain as well as wind and chill. 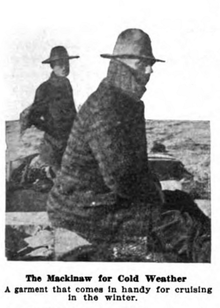 Up there where Michigan is a suburb of Canada, loggers and other hardy outdoors types needed warm clothing, even when it got wet outside.  Thus, a nice heavy duty wool fabric was developed, which provides warmth and even protection against rain and sleet.  Heavy and densely woven, Mackinaw cloth often comes in a plaid pattern, often a “Buffalo Plaid.”  The cloth is similar to “Melton,” and is used in coats, heavy shirts, blankets and other items.  The cloth dates back to the early 19th Century when local women, both White and mixed race (White and Native American) created the heavy cloth for the men in the area of Fort St. Joseph, Ontario.  (The British side of the Mackinac Straits.)  The jackets made famous by the Mackinaw Cloth were shorter than the usual long great coats to allow men easier travel in deep snow.  The Mackinaw style jacket is popular today among younger folks trying to appear outdoorsy!

A nifty island off the coast of Naples, Italy, Capri is a resort island popular with mainland Italians and others.  Back in the day (before World War I when social mores were far different than today), Capri was a popular hang out for rich gay men to meet.  The eponymous trousers known as Capri Pants are about 3/4 length pants, longer than shorts but markedly shorter than regular pants.  They were revealed to the world by fashion designer Sonja de Lennart in 1948, and got a major dose of publicity by being featured in the 1953 film, Roman Holiday.  Actress Mary Tyler Moore further enhanced the popularity of Capri Pants by often wearing them on the television blockbuster series, The Dick Van Dyke Show during the 1960’s.  Capri Pants also go by alternate names, notably “Clam Diggers” and “Flood Pants.”  Not just for women, some famous men have sported Capri Pants, among them tennis pro Rafael Nadal while competing in tournaments.

US women’s beach volleyball team has cited several advantages to bikini uniforms, such as comfort while playing on sand during hot weather.  Photograph by Fido shows US beach volleyball players Jennifer Fopma and Brooke Sweat in their uniforms.

The same Bikini Atoll of the Marshall Islands in the Pacific that served as a target for American atom bomb testing in 1946 became the namesake of the Louis Reard designed 2 piece bathing suit, allegedly named “Bikini” because of its “explosive effect” on men observing women wearing the suits!  An apt name if there ever was one…  As much as we like and respect the other items of clothing we have named, we must admit this latest entry is our favorite.  How about you?

Question for students (and subscribers):  What clothing item or type do you consider the most famous or the best thing named after a place? Please let us know in the comments section below this article.

Chrisman-Campbell, Kimberly. Worn on This Day: The Clothes That Made History. Running Press, 2019.

The featured image in this article, a photograph by Erik Holmén on display at the Nordiska museet of teen models in capri pants and jersey jacket and jumper, skirt in Scottish wool and stockings in crepe nylon, posing sitting on the floor, is licensed under the Creative Commons Attribution 4.0 International license.