Friday, January 24
Trending
You are at:Home»Lifestyle»Fashion»5 Types of Clothing Named After a Place

On September 22, 1965, the Indo-Pakistani War over the disputed region of Kashmir came to an end.  The war had raged for about a month, resulting in a few thousand deaths on each side, along with the loss of a few hundred tanks and dozens of aircraft, a fairly substantial list of losses for a relatively short war.  The region of Kashmir, located at the Northernmost part of the Indian sub-continent, is both occupied and disputed between China, Pakistan and India.  The region of rugged terrain is the home to pashmina goats that provide the fine wool that goes into the production of cloth we know as “Cashmere,” an Anglicized version of Kashmir.  Many places have become synonymous with the cloth or types of clothing the location is famous for, and today we list 5 of those iconic and eponymous types of clothing or fabric.  (Stand by for a second article naming “Another 5 Types of Clothing Named After a Place.”) 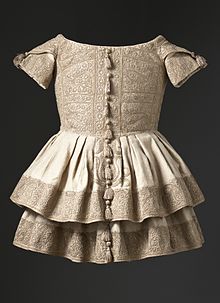 A boy’s frock produced circa 1855 in Kashmir; cashmere wool twill with silk embroidery and silk tassels.

The pashmina goat also logically called the “Cashmere goat,” provides a fine, soft undercoat of wool used in the production of Cashmere fabric.  Other goats of the region may also be used in the production of Cashmere.  This fine variety of wool has insulating properties about 3 times as effective as that of the wool derived from sheep.  So highly valued is the Cashmere wool clothing, that vast areas of Asia have been overgrazed by Goat farming resulting in environmental damage that may actually alter World weather patterns.  China and Mongolia are the leading producers of Cashmere wool today, and so called “Cashmere” products are sometimes found to not actually contain genuine Cashmere wool.

A handkerchief with a typical Madras pattern.  Photograph by Milliped.

Now called Chennai, the city formerly known as Madras is famous for a lightweight variety of cotton cloth made distinctive by its typically plaid patterns.  The lightweight and breathable nature of Madras cloth makes it well suited for Summer wear, allowing for ample air circulation and cooling while providing some protection against the rays of the sun.  Further stipulations that make Madras unique are that the cotton must be carded, not combed, which results in a bumpy fabric, and that the color pattern be the same on both sides of the cloth, not merely printed on one side.  The cotton fibers are hand dyed and produced in about 200 villages in the Tamil Nadu state of India, in which Chennai is located.  Madras clothing, particularly shirts, became popular in the United States in the 20th Century, and especially in the 1930’s became somewhat of a status symbol.  Another distinctive aspect of Madras cloth is the certainty that the dye will “run” when the article of clothing is washed, giving the cloth a unique appearance.

Hey, it is not just onions Bermuda is famous for!  Perhaps you have heard of “Bermuda Shorts,” a semi-dressy type of short pants for men and women that may or may not bear a cuff and are cut to about an inch above the knee. These famous short pants have an origin with the British military. Supposedly the shortage of cloth on Bermuda during World War II resulted in the widespread use of short pants as a method to save cloth, spawning a fashion craze.

A fez.  Photograph by Horst Frank~commonswiki.

This eponymous round, flat topped type of hat usually adorned with a tassel on top is dyed with the red berries that came from the city of Fez, Morocco, which lent its own name to this type of hat.  Also called a “tarboosh,” the Fez may have its origins in Ancient Greece, with the hat style introduced into North Africa by Greeks looking for lands to conquer.  What you may not know, is that the Fez became a fashion fad in the United States and Britain around the turn of the Century (19th to 20th) among high society men in smoking rooms.  In 1925, the revolutionary government of Turkey banned the Fez as a symbol of the past.

A pair of Bean Boots.  Photograph by Tom Fish.

Perhaps you have heard of the company known as LL Bean, Incorporated, maybe even receiving their catalogs in the mail.  Would you believe this manufacturer of a wide array of outdoorsy clothing and shoes began in 1912, founded by Leon Leonwood Bean, just to make a single product?  That product is the iconic Maine Hunting Shoe, a composite bit of footwear developed by Mr. Bean to provide Maine hunters with footgear that would keep their tootsies warm and dry.  These famous hunting boots were later called Bean Boots and are constructed by grafting the normal leather boot uppers onto a lower made of rubber with an aggressive tread.  Sometimes also called “duck boots” or “duck shoes” (for the low quarter variety), Mr. Bean insisted on only providing a quality product, so when his initial batch proved less than satisfactory, he refunded his customers’ money and promised to improve the product.  He managed to improve his boots by contracting directly with US Rubber to provide appropriate lowers for him to graft the leather uppers to.  Popular all over the world, the Bean boots and shoes are sort of a “preppy” status symbol and are especially popular in New England (no surprise!).

Question for students (and subscribers): What clothing item or type do you consider the most famous or the best thing named after a place?Please let us know in the comments section below this article.