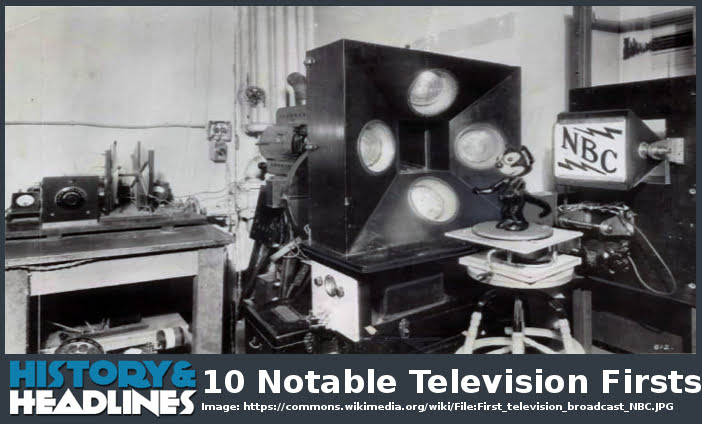 On May 3, 1952, the Kentucky Derby, probably the most famous and prestigious horse racing event in the United States, was first broadcast on television.  Today we take a look at when significant events first made their television debut.  As always, feel free to nominate an event or events you believe belong on this list.

For this particular historic first, it is fitting that the Olympics takes the honors of being first.  In this case, we refer to the 1936 Summer Olympics held in Berlin, Germany.  Since there were no privately owned televisions and no television broadcasting stations, Germans had to go to “Public Television Offices” in Berlin and Potsdam to view coverage of the Olympics, 72 hours’ worth of the Games.

As with football, the first televised baseball game was not a major league affair, but a game between universities, Columbia and Princeton, but MLB was quick to jump on the new technology by broadcasting the historic game between the Reds and Dodgers, played at Ebbets Field, Brooklyn.  The 1939 World’s Fair, held in New York City, was the setting for the technology demonstration of television to the public.

The first time a football game was broadcast on television, perennial powerhouses such as Ohio State and Alabama were notably absent.  Instead, the honor of being first went to Fordham and Waynesburg, Fordham, then a football power, was coached by “Sleepy Jim” Crowley, a member of the famous Four Horsemen of Notre Dame.  Fordham won the game as expected, 34-7, and the players were not even told they were on television!  The game was sent via relay to the Empire State Building and broadcast for viewing at the New York World’s Fair.  Only 500 to 5000 people are estimated to have seen the broadcast.  College football on television has come a long way since!

The Brooklyn Dodgers made television history yet again when they faced off with the New York Yankees in the 1947 World Series which was broadcast on limited television, only to New York City, Philadelphia, Schenectady, and to Washington, D.C., where President Truman watched.  In fact, on October 5, 1947, Truman made the first ever television broadcast from the White House, a speech in which he asked Americans to cut back on their consumption of grain products so that starving Europeans could have some food.

On January 17, 1949, American television audiences were treated to a new form of entertainment, the situation comedy, or more familiarly known as the sitcom.  The Goldbergs, a show about a New York Jewish family living in a Bronx tenement.  The main character was the matriarch, Molly Goldberg, played by actress Gertrude Berg.  The show had been a radio program from 1929 to 1946, at first weekly but due to great success becoming a daily show in 1931.  The public was already familiar with the premise of the show and the characters, so taking to the television version was more or less assured.  In fact, of radio comedies only Amos ‘n’ Andy had a longer run.  The show ran in various incarnations through the 1956 television season.

The event called “the most exciting 2 minutes in sports” dates back to 1875, and the public at large finally got a chance to see the spectacle of fancy ladies’ hats and mint juleps on TV in 1952.  In that historic race, Hill Gail, ridden by veteran jockey Eddie Arcaro, won the race in a second fastest ever (at the time) time of 2:01.6.  Unfortunately, Hill Gail suffered an injury during the race and was never a championship caliber racer afterwards.  A stallion, Hill Gail was a bust as a stud horse, with limited success by his sons and daughters.

Most Elvis fans are familiar with his first appearance on the Ed Sullivan Show in 1956, and of course, Sullivan’s show was truly the Big Stage in those days, but the King of Rock and Roll actually appeared on a lesser known show, not once, but several times when he performed on the CBS production called Stage Show, produced by the Big Band Dorsey brothers.  On July 1, 1956, Elvis aced another television first, by serenading an obviously bored Basset Hound to his rendition of “Hound Dog” on the Steve Allen Show.

Though the NFL obviously lagged far behind Major League Baseball with grasping the importance of television, and further inflicted local blackouts on NFL cities even once the games were regularly broadcast, they did join the modern world in 1958 by televising a truly great NFL Championship game, one in which the Baltimore Colts beat the New York Giants in “sudden death” overtime!  What a great way to showcase the premier NFL game of the year, a pre-cursor to the epic Super Bowls that each year are a major television event since the first Super Bowl in 1967.  That historic event, not called “Super Bowl” at the time, had limited television coverage.  The Colts-Giants Championship Game has often been called “The Greatest Game Ever Played,” and must have had a profound effect on the popularity of NFL football.

Prior to 1960, American voters were spared the ordeal of watching presidential candidates debating on television.  At least in 1960, it was only the actual nominees that debated, and not those running in the primaries.  John F. Kennedy faced off with Richard Nixon, and Nixon had the advantage of being the sitting Vice President to a relatively popular Dwight Eisenhower.  Kennedy looked better on television and pulled off the upset to win the White House.  Kennedy was telegenic, handsome, well dressed and kind of dapper, while Nixon appeared sweaty, shabbily dressed, and nervous.  Ever since, the televised debates have been a major spectacle and have provided some memorable moments, both good and bad, and campaign managers have made tremendous efforts to prepare their candidates for the small screen.

Elvis Presley’s Aloha from Hawaii concert was sent to television sets live via satellite, in color no less, the first time any concert featuring a single star had been so broadcast. Unfortunately, audiences in Asia and Oceania got the broadcast live, but in the United States, Super Bowl VII preempted the fantastic concert and the Elvis event was shown delayed.  On June 25, 1967, a black and white satellite transmission called Our World had been transmitted to television, but not only was that broadcast not in color, it featured numerous artists as diverse as The Beatles, Maria Callas, Pablo Picasso and representative artists from 19 countries.  Today we take live shows for granted, no matter where they are happening in real life.  Back then, such events were monumental.

Question for students (and subscribers): What television “first” do you believe is most significant? Please let us know in the comments section below this article.

The featured image in this article, a publicity photograph by the National Broadcasting Company (NBC) issued for their 30th anniversary in 1956 depicting their work in television beginning in 1928, is in the public domain in the United States because it was published in the United States between 1926 and 1977, inclusive, without a copyright notice. For further explanation, see Commons:Hirtle chart as well as a detailed definition of “publication” for public art.