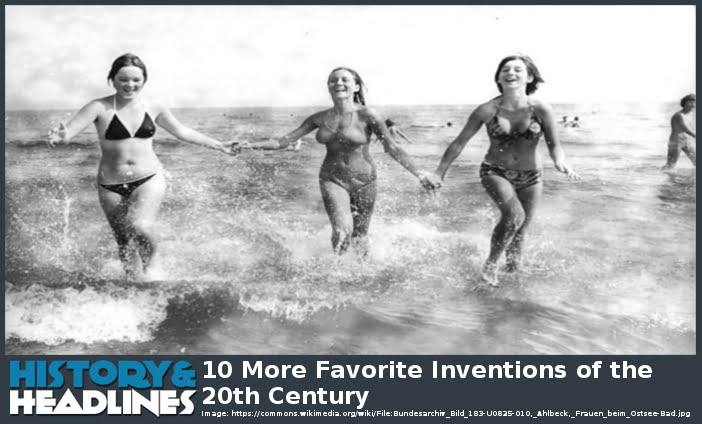 On July 5, 1946, the bikini swimsuit went on sale after being debuted at the Molitor Pool of Paris, France.  Ever since, continued developments in this fashion icon have kept the interest of men over most of the globe, and provided Sports Illustrated Magazine with an annual blockbuster issue.  Here we list 10 more of our (subjective) favorite 20th Century inventions, a sequel list to our prior article on this subject.

We can thank Mohamed M. Atalla and Dawon Kahng at Bell Labs for this marvelous invention, dating back to 1959, though of course the technology did not hit mainstream until 1975 when the Cromemco Cyclops became the first such camera available commercially. (Meanwhile, other researchers contributed to the developing technology.)  Even then, acceptance was slow until technology allowed for cheaper production, but when that development (See what I did there?  A joke!) came about the public gobbled up digital cameras and when cell phones became mainstream the digital camera and later digital video camera became an integral part of the device.  No longer did people have to play games with film and photo processing, they could save their pictures or videos to tiny thumb drives or little cards and see high quality pictures on their computer or television screen, and even print color pictures at home.  Hooray!  No longer would the bumbling Dad take wedding videos with no film in the Super 8 video camera (which, no kidding, my Dad did at my wedding, so we have no video) or would you run out of film or be unable to find the right speed film for the situation.

This time we can thank British engineer Alan Blumlein at EMI for developing the stereo phonograph record, and for good measure the same guy also came up with “surround sound” and stereo movie films.  Stereo radio broadcasts were attempted as far back as 1924, but engineers struggled to perfect the technology until the 1960’s, and the public first got widespread ear happiness when stereo radio became common during the 1970’s.  Likewise, television shows were adapted to use stereo sound as well, lagging only a bit behind radio.  Cars did not get stereo radio until 1969, and such sound systems were not common until several years later.

Much as the ability of birds to fly caused men to long for the sky, the ability of cats and other creatures to see in dark made men envious, especially military types.  People tried to research night vision ability as early as the late 19th Century, with the first success in infrared night vision enhancement technology coming in the 1930’s courtesy of the Dutch firm Phillips, just in time to be developed for use in World War II.  In the US, RCA was also developing first generation night vision technology, though it was left to the German army to be the first to field such a device in 1939, though not until 1943 did night vision devices, based on infrared illumination, become more widely used.  The US Army also developed and deployed a cumbersome infrared illuminator and vision scope mounted on the M-1 Carbine for use at night, and the systems was used with some success, especially in the Pacific theater.  While World War II night vision systems required an infrared illuminator (a large light not visible to the naked eye) in order to work, later systems were able to intensify light well enough to preclude the need for a separate illuminator and even later thermal vision night vision devices would be able to see in complete darkness.  It must be noted that the IR illuminator used on early night vision devices was easily seen by the enemy if the enemy had IR viewing equipment, making the use of such devices dangerous to the user.  By the late 20th Century, night vision devices became largely accessible to private parties and are now a common feature of digital camera and video technology, hunters, and whomever wants to see in the dark.

On March 22, 1960, Scientists Arthur Schawlow and Charles Townes of Bell Labs in New Jersey patented their invention of the LASER, a device that concentrates and focuses visible light that today we find useful in a myriad of applications. Without the laser, we would not have CD’s and DVD’s, BluRay’s and the like.  Albert Einstein himself opined that the laser was possible, way back in 1917, and when the highly focused light became reality, we got laser pointers (classroom device and cat teasers!), laser weapons, laser target designators for precision guided weapons, laser traffic control speed measuring devices (Boo!), laser tag, laser etched art and machining, and perhaps best of all, minimally invasive laser surgery, including eyesight corrective surgery.  What a fantastic device!

Back in the bad old days, televisions, radios, and radar units had to have vacuum tubes to work.  Those tubes would wear out, and Dads would send their sons (meaning ME) up to the store where they had tube testing machines, to see which tube needed to be replaced.  Transistors made radios and televisions (and other devices including computers) much smaller, lighter, and best of all, much more reliable than those devices that used vacuum tubes.  Plus, as a bonus, transistors became far cheaper to make than tubes.

I may be hard for people that came after the Baby Boomer generation to conceive of having to play Monopoly, Scrabble, Risk and Yahtzee because there were no video games, but believe me, once upon a time video games were just one more fantasy of the future.  While “Pong” might not have been particularly exciting (though it was to us!), the many games that followed sure were, especially as technology made the games better and better.  While we do indeed regret the loss of dads playing catch with their sons and girls playing hopscotch and jumping rope, there is indeed a place for indoor video games when weather does not permit outside play.  Waiting rooms of the doctors’ offices are another place where we are grateful for video games!  Lazy parents are also probably rather grateful for the electronic baby sitters…

We throw these 2 unrelated delicious treats together to represent the wonderful food advances of the 20th Century.  Hard to believe something so ubiquitous as Nachos or Buffalo Wings could have ever not been a thing, but they certainly were not a thing prior to the dates listed above!  Frozen pizza, Dairy Queen, McDonald’s, Burger King and all sorts of staple, necessary foods were non-existent prior to the 20th Century, meaning those days were “the bad old days” indeed!  (Note: We have been to the famous Anchor Bar in Buffalo, original home of the Buffalo Wing.  Yes, they were darn good!)

The concept of cooling people off in sweltering heat is not new, as you can see in movies about ancient times with slaves fanning rich and powerful people with gigantic feather fronds.  Even Benjamin Franklin (our own nominee for “World’s most interesting man”) tinkered with the idea, but not until Mr. Carrier used the power of electricity in 1901 did A/C take its modern form and thank goodness it did!  When this author was a lad, normal middle class people did not have air conditioned cars or homes, though by the 1970’s that situation rapidly changed.  Now, anyone that does not have home air conditioning probably lives with Kenny from South Park.  Long summer road trips in the dark ages meant all windows rolled down and incredible wind buffeting and noise inside the car.

While plastics do present a terrible threat to the environment due to careless discarding of trash, the stuff is incredibly useful as it takes so many forms, from toys, go gun stocks, to hosiery and clothing, to dinnerware, medical replacement body parts and the list goes on and on.  Without plastic bags, we had to use wax paper bags for our lunch sandwiches, and believe me, that was not so good.  With plastic bags you can carry incredible amount of groceries from your car to your kitchen at one time, compared to only handlining one or two paper grocery bags at a time.  Brushes, combs, Halloween decorations and costumes, watches, furniture and about 50% of the volume of each modern automobile!  (Though only 10% of the weight, which is an indication of how great this stuff is.)  Even our money is now largely plastic in the form of credit and debit cards.

Diabetes used to be a death sentence, at least until researchers discovered insulin and how to recover it from animals (generally pigs) in order to treat diabetic people.  During the 1980’s scientists came up with synthetic production of insulin, driving the cost down and making the life saving hormone available to most people that need it.  The 20th Century saw many major advances in the field of medicine and pharmacology, such as transplant surgery, open heart surgery, laser surgery, Polio vaccine and birth control pills, not to mention antibiotics such as penicillin, a REALLY BIG medical advance.  We pick synthetic insulin as the representative of 20th Century medical innovation because of the ever increasing number of Americans diagnosed with diabetes and the high number of people we know with that particular medical need.

Question for students (and subscribers): What 20th Century invention is your favorite and why?  Please let us know in the comments section below this article.

The featured image in this article, a photograph by Benno Bartocha (1936–2020) of women, was provided to Wikimedia Commons by the German Federal Archive (Deutsches Bundesarchiv) as part of a cooperation project.  This file is licensed under the Creative Commons Attribution-Share Alike 3.0 Germany license.