10 Iconic American Things You Do not See Anymore

On June 27, 1985, US Route 66, known as “The Main Street of America,” was officially taken off the list of US highways.  Established in 1926, it was the main road from Chicago to Los Angeles (Santa Monica).  Spawning a hit song (by Nat “King” Cole) and a hit television series, this route was the American highway, at least until superseded by the Interstate Highway System.  It survives (barely) today in pieces as “State Route 66” in some states and as stretches of a “National Scenic Byway.”  Many other symbols of America have also come and gone, and here we nostalgically list 10 of them, although many would say “good riddance” to some of them (so would we).

Once a shameful symbol of American society, signs delineating “White Only” or “Colored Only” dotted the land.  These hateful reminders of the past did not start to disappear until the 1950’s (slowly) and then finally were given the boot in the 1960’s.  Obviously, this entry is a prime example of an iconic symbol that once defined America we do not miss.

Once an all too common medical device, the electric powered breathing apparatus could be used for all sorts of respiratory distress, but was most closely associated with treatment of polio victims.  Conceived of 3 centuries before it became practical, the modern version was first used in 1928, and as polio ravaged the country far too many families knew the sight of them well.  With the polio vaccines developed in the late 1950’s and the drastic reduction in cases of polio, the numbers of “iron lungs” also greatly diminished and they were no longer a common item.

Okay, no, maybe not the kind you see on WWE!  We reckon you still see those on occasion, but anyway… As late as the 1960’s the actual clothes line was part of the American landscape, seeing a family’s laundry pinned to a line or series of lines in the back yard.  Urban areas had lines on pulleys between buildings and rotating carousel contraptions were in many yards.  In the 1960’s more and more people succumbed to the lure of the efficiency of electric and gas powered clothes driers that worked just as well in the rain and snow as on sunny days.  Unfortunately, another American icon we hardly ever experience anymore is the fresh feel and smell of naturally dried laundry.

Seeing the slow moving trucks (horse drawn as late as the early 1950’s) delivering milk and dairy products daily to houses in every neighborhood was once part of the everyday landscape.  The milkman in his uniform and hat hustling to milk chutes or insulated metal boxes by a back door would pick up the empty bottles and leave the fresh ones.  If the kids that lived there were lucky, Mom might have left a note for a quart of chocolate milk as well!  By the 1970’s these became rarer as time went on and now are virtually extinct.

For decades on end any neighborhood in America (except during school hours) would have youngsters playing hopscotch and skipping rope as part of the scenery.  Kids playing outside are now about as rare as dinosaurs.  Presumably they are indoors playing video games or watching television.  After school or on weekends all up and down the street dads would be playing catch with sons, another rare sight today.  Snow forts and snowmen were once on display in almost every yard where children lived, now seeing one is a novelty.

From 1925 to 1963 this brushless shave cream (#2 brand in the US) advertised on signs along American highways, using clever rhyming poems and ditties on a series of sequential signs, each having just a word or 2 (or few) until the final sign said “Burma Shave.”  As Americans took to Interstate Highways the country roads featuring the signs were no longer heavily traveled and when Burma Shave was bought by Phillip Morris in 1963 the signs were taken down.  Cracked fact:  For those in need of a nostalgia fix, Arizona’s State Route 66 (yes, it’s the old US 66) has re-created Burma Shave signs along its way.  Cracked fact:  During World War II the Burma Shave signs bore patriotic morale boosting messages.

Along with other brands of soda pop, Coca Cola and the rest normally came in glass bottles.  The consumer would have to pay a small deposit, and would get the deposit refunded when the empty bottles were returned to the store.  Huge racks of empty bottles were found near the front of every grocery store.  Kids would enthusiastically round up as many bottles as they could find in order to make some fun money.  Now if you find soda pop in glass bottles it is usually novelty brands and the bottles are not returnable.   The old Coke bottles had the city of origin on the bottom of the bottle and kids had fun seeing who had the bottle from the farthest away.

As described above, as an American you could once “get your kicks, on Route 66.”  About 2448 miles long, this was not the limited access highway we enjoy today, but a road that could be anything from a lonely country lane passing through farms or prairie or the main street of hundreds of towns along the way.  Dotted with gas stations, motels and diners, millions of Americans used the road at one time or another.  Cracked fact:  New Mexico had the longest stretch of the road, 487 miles of it.  Numerous businesses and towns along the route dried up and withered as traffic was diverted to superhighways, but numerous markers, monuments, and reminders of the past glory of America’s “Mother Road” remain. 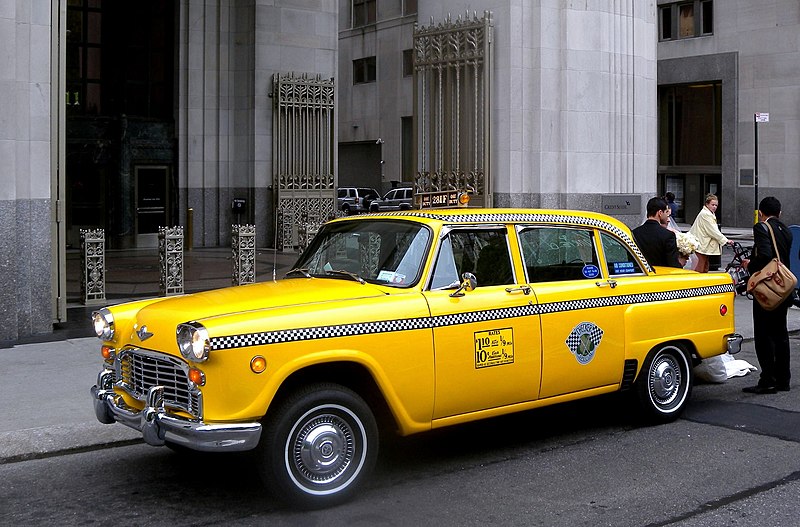 Checker Motors Corporation built the iconic American taxi cab from 1922 until 1982.  These tank-like cars were the epitome of durable and reliable public transportation, and were part of the rich heritage of car building in Michigan.  Alas, the oil shortages of 1973 and 1979 doomed these gas guzzlers, although the company stayed in business as a parts supplier to GM until going completely out of business in 2010.

Once thundering across the prairies in huge herds of thousands, by 1900 they were nearly extinct.  US Army officials tasked with “pacifying” Native Americans made it policy to kill as many buffalo (technically bison, scientific name Bison bison) as possible to deprive the Native Americans of their sustenance, thus forcing them to move to reservations or starve.  Thanks to conservationists like Teddy Roosevelt, the buffalo was saved from extinction and lives wild and free in Yellowstone Park, but will never again roam in the herds that symbolized the American West.

Question for students (and subscribers): Which ones do you miss the most?  The least?  Please let us know in the comments section below this article.