On June 27, 1980, President Jimmy Carter authorized Helen Keller Day to commemorate her 100th birthday.  Famous for her strong will to overcome adversity (blindness and deafness) she has been an inspiration to millions of people all over the world.  There is, however, more to the story and this we will share with you.

Born in Alabama in 1880 and died in 1968, Helen led a long life with her disabilities.  Among her ancestors was Robert E. Lee, a cousin of her grandmother. Able to see and hear just fine at birth, she contracted an illness (possibly meningitis or scarlet fever) at the age of 19 months after which she could neither see nor hear.  As a young child, she communicated by self made signs with the daughter of the family cook.

Her parents sent her North where Alexander Graham Bell recommended her to Perkins Institute for the Blind in Boston.  There she was paired with Anne Sullivan, a teacher who herself had limited vision.  It was a match about as perfect as possible, and Anne taught the young Helen so well that the play and 1962 movie about Anne and Helen (starring Anne Bancroft as Anne and Patty Duke as Helen) are called “The Miracle Worker.”  (Other movies and many books about them have also been produced.)

Helen went on to become the first deaf and blind person to earn a bachelor’s degree at Radcliffe.  Helen was admired by no less than Mark Twain who introduced her to Henry Rogers of Standard Oil who in turn paid for her education.  Helen learned to read Braille, sign language (with her hands) and even how to speak, becoming a famous speaker and writer.

Aside from advocating for the disabled, Helen was a political activist, a major aspect of her life that is often glossed over.  She actually helped found the ACLU in 1920 and had met every single president from Cleveland to Johnson.  She remained friends with Mark Twain and Alexander Graham Bell and became friends with Charlie Chaplin as well.  Not merely liberal, Helen was an outright socialist, having joined the International Workers of the World (IWW, or “Wobblies”) in 1912.  She was also an advocate for the poor, working people and women, as well as the disabled.

Helen suffered a few strokes in 1961 and died in 1968, but not before she was awarded the Presidential Medal of Freedom.  She also appears on the Alabama state quarter (coin) and has appeared on a US postage stamp.  In 1965 she was elected to the National Women’s Hall of Fame and was named by Gallup (the poll people) as one of the Most Widely Admired People of the 20th Century, among her many honors.  A statue of Helen is on display at the United States Capitol, the first of a child (Helen at age 7) or of a disabled person. 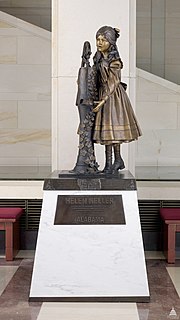 Helen Keller is probably the most famous person to have overcome disabilities, but of course, there are others.  Who do you know that deserve mention?