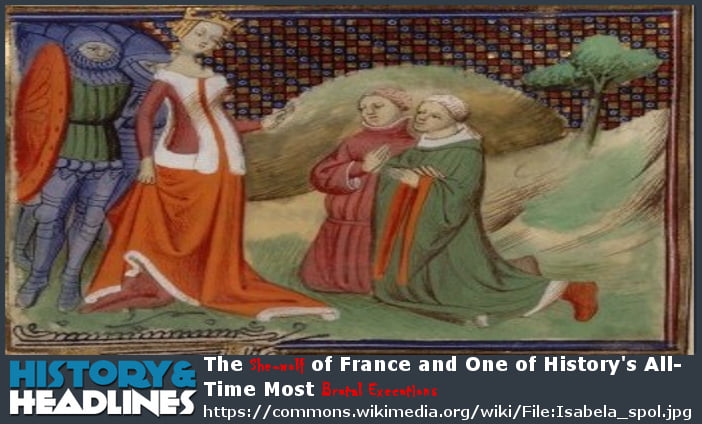 Fans of the film Braveheart may recall the heir to England’s throne, future king Edward II, having eyes for men rather than his French wife, Isabella the She-wolf.  One of these men, Hugh Despenser, 1st Lord Despenser (c. 1286 – November 24, 1326), became a victim of that vengeful woman in one of history’s all-time most brutal executions, because as they say, well, sort of, “Hell hath no fury like a she-wolf scorned”!

Earlier on our site, we presented an article on hanging, drawing, and quartering.  As that article mentioned, the process took multiple steps that included torture as well as execution.  Yet, when it came time for Isabella to seek revenge on her husband’s supposed lover, she and her executioners added some “bonus” steps.

Isabella, daughter of a king of France, had been essentially insulted by her husband even early in their marriage when Edward, son of the villainous king from Braveheart, gave some of her jewels to his then male favorite, Piers Gaveston.  Over the years, the man and wife grew only further apart.

In 1325, Edward II refused to pay homage to the French king and sent his French wife to France to negotiate.  By this time, Edward had become enamored with a new favorite named Hugh Despenser the Younger.  Instead of negotiating on Edward’s behalf, Isabella took her own lover and raised on army.  In 1326, Isabella and her lover (Roger Mortimer) invaded England and hanged and beheaded the elder Despenser and hanged Despenser’s vassal Simon of Reading next to him, but what they did (if the sources are to be believed) to Edward and the younger Despenser has to be just about one of the most brutal acts of any monarch in human history.

Having successfully invaded England, Isabella and Roger continued to assert their dominance by trying and then executing the younger Despenser in the most embarrassing and gruesome manner possible.  The horrible process included dragging him behind four horses to his place of execution, while the crowd jeered at him, proving that he had lost his power, stripping him naked, writing biblical verses denouncing arrogance and evil on his skin, hanging him from a gallows 50 ft high, a shameful death, the punishment for a common thief, cutting him down before he could choke to death, tying him to a ladder in full view of the crowd, slicing off his penis and testicles which were burnt before him, while he was still alive and conscious, showing to the crowd that he had ceased to be a man, slitting open his abdomen, slowly pulling out, and cutting out, his entrails and, finally, his heart, which were likewise thrown into the fire showing that the land was being purged of evil as his evil desires were thought to reside in his heart and entrails, beheading his corpse and cutting his body cut into four pieces jeopardizing his chances of Salvation after death, and mounting his head on the gates of London.

As for Edward, in 1327, he abdicated, was imprisoned, and allegedly murdered via red-hot poker through the anus…

The new king, Edward III, Edward II and Isabella’s son, had Roger Mortimer executed in 1330, thereby diminishing the influence of Edward III’s mother.  Edward III also, given that his mother was a French princess, claimed the throne of France and in the process started the Hundred Years’ War, but that is a story for another article!

Question for students (and subscribers): Who do you think was the villain (if there was one) of the tragic marriage of Edward and Isabella?  Please let us know in the comments section below this article.

For more information on the she-wolf and one of history’s more dysfunctional ruling families, see…

The featured image in this article, a 15th century manuscript illumination from Froissart’s Chronicles by the Boethius Master of Edmund FitzAlan, 9th Earl of Arundel and Hugh Despenser the Elder (or Hugh Despenser the Younger) before Queen Isabella, is in the public domain in its country of origin and other countries and areas where the copyright term is the author’s life plus 70 years or fewer.