Thursday, June 4
Trending
You are at:Home»March»March 19»March 19, 1941: The Tuskegee Airmen, the First Group of African-American Pilots in the U.S. Military, Activated

Consisting of the 332nd Fighter Group and the 477th Medium Bombardment Group, the connection with Tuskegee University’s involvement with the Civilian Pilot Training Program is how the units got their colloquial name. Also known as “Red Tails” or “Red Tail Angels” due to the markings on their planes, the Tuskegee Airmen were pioneers in aviation, as prior to their formation the U.S. military had not allowed pilots of African descent to fly military planes.  In World War I, numerous African American volunteers were turned away for this reason, but apparently by World War II, the military finally had enough sense to change this policy.

Prospective pilots (and other aircrew) were given the same IQ and psychological tests as White airmen, and the program got a big boost when First Lady Eleanor Roosevelt took a flight piloted by an African-American pilot in 1941.  An unintended milestone for African-Americans was created by this program when it was ordered that black flight surgeons be assigned to the new black air units, resulting in the first African-American flight surgeons in U.S. military history.

At first flying P-39 Airacobra and P-40 Warhawk fighters, the fighter units switched to P-47 Thunderbolts in the dive bombing and air-to-air role, later switching to the state-of-the-art P-51 Mustang.  The bomb group trained with the B-25 Mitchell, but did not see combat.  Flying over Italy and escorting bombers over Germany, the Red Tails were highly effective and acquitted themselves with skill and honor, achieving a couple of notable feats, such as shooting down 3 German Me 262 jets in one day and another time shooting down 5 German planes in only 4 minutes.

Of the 900+ pilots trained in the program (and 16,000 ground crew), 355 went overseas to see combat, to whom 96 Distinguished Flying Cross medals, at least 1 Silver Star and numerous other medals were awarded.  These fighter pilots shot down 112 enemy airplanes and destroyed nearly 1,000 vehicles (trucks, rail cars, armored vehicles, etc.) on the ground.  Their record protecting bombers was among the best.  Unfortunately, 84 of these brave men lost their lives, 68 of them in combat.

Things were not always smooth as the airmen were sometimes insulted and discriminated against, but with such an exemplary record, their future was not in doubt.  No longer would African-Americans be denied the opportunity to fight for their country and fly military airplanes in combat.  Benjamin O. Davis, Jr., the group’s original commander, would go on to become the first African-American U.S. Air Force general. 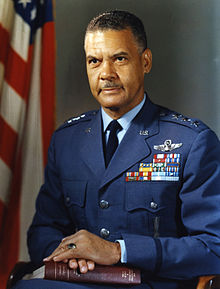 Numerous television and movie references to the Tuskegee Airmen have been made, notably the 2012 film Red Tails.

A strange aspect to this story is a myth that started with an erroneous claim in Liberty magazine that the Tuskegee Airmen never lost a bomber they were escorting to an enemy fighter.  That was not true as 25 to 27 bombers escorted by the Red Tails were indeed shot down, although that number figures well when compared to the average of 46 bombers shot down by bombers escorted by White fighter groups.  Our hats are off to these fine pilots and patriots.  Job well done. 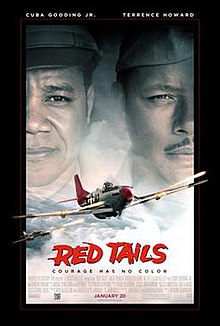 Question for students (and subscribers): What else do you know about Benjamin O. Davis?  Please let us know in the comments section below this article.

The featured image in this article, Maj James A. Ellison reviews first class of Tuskeegee Airmen, returning the salute of Mac Ross, one of the first graduates. A BT-13 is visible on the left, is a work of a U.S. Air Force Airman or employee, taken or made as part of that person’s official duties. As a work of the U.S. federal government, the image or file is in the public domain in the United States.

A video version of this article is available on YouTube: