Tuesday, April 7
Trending
You are at:Home»Society»Military»The Tsar Bomba, or How I Learned to Stop Worrying and Love the Biggest, Baddest Bomb Ever Built by Man!

On October 30, 1961, the Soviet Union detonated the hydrogen bomb Tsar Bomba over an archipelago in the Arctic Ocean in the North of Russia; at 50 megatons of yield, it is still the largest explosive device ever detonated, nuclear or otherwise by humankind!

Roughly a year before the Cuban Missile Crisis threatened to plunge the world into a nuclear world war in which both sides possessed large arsenals of weapons of annihilation, the Soviets showed off their nuclear potential by testing the “Tsar Bomb”. 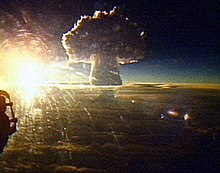 The bomb weighed 27,000 kilograms (60,000 lb) and was 8 metres (26 feet) long.  It was designed to have a yield of 100 megatons, but was only tested at 50 to 58 megatons so as to prevent too great of a radioactive fallout.  To put all of that into perspective, the bomb that did this to Nagasaki had a yield of 21 kilotons.  The bomb dropped on Hiroshima had an even smaller yield.  If those relatively “primitive” atomic bombs still managed to devstate two cities and kill well over 100,000 people combined, imagine what a bomb several times their strength could accomplish!  In fact the highest yield the United States ever even tested a bomb at was 15 megatons, i.e. just under a THIRD of the Tsar Bomba’s yield.  Detonated on March 1, 1954, the device was the most powerful nuclear device detonated by the United States and its first lithium-deuteride-fueled thermonuclear weapon.  This test, Castle Bravo, was the first in a series of high-yield thermonuclear weapon design tests conducted by the United States at Bikini Atoll. 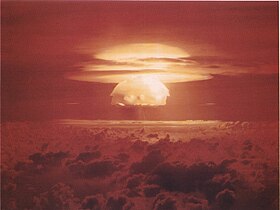 On Halloween Eve of all days, the Soviets demonstrated just how destructive mankind could be.  Nothing humans have ever created had such destructive potential as the Tsar Bomb (remember the actual explosion was only at half of its designed yield) and yet, it was but one bomb in an era in which Cold War superpowers possessed many nuclear devices.  Watch this video and imagine what if the Cold War ever turned hot…

The Tsar Bomba’s fireball, about 8 km (5.0 mi) in diameter, was prevented from touching the ground by the shock wave, but nearly reached the 10.5-kilometre (6.5 mi) altitude of the deploying Tu-95 bomber.

Fortunately, it was the only device of this magnitude ever built (or so we have been told…) and as such, we need no longer worry about it actually being dropped on us any time soon and can instead just marvel in the fact that humans actually made something so powerful.  Now, about those other thousands of smaller nuclear devices still possessed by at least America, Britain, China, France, India, Israel, North Korea, Pakistan, and Russia and that could potentially actually be used in some future conflict, well, we shall see.

A good starting point for comparative videos of the Tsar Bomba explosion and where it ranks in a list of the top 10 nuclear explosions caught on tape, please visit our sister site.  We also recommend one book in particular for more information on the subject in general:

Share. Twitter Facebook Google+ Pinterest LinkedIn Tumblr Email
Previous ArticleLady Liberty and the First Known Use of Ticker-Tape in a Parade
Next Article A Man Who Lost His Face at Normandy and Continued to Fight with No Eyes!