On Good Friday, somewhere around 33 AD Jesus of Nazareth, prophet to Islam and Judaism, the Christ and Savior to Christians, was crucified by the Romans in Jerusalem. Crucifixion was a particularly brutal and drawn out process of execution often reserved for “dangerous” criminals, ones that threatened the status quo.  Here we list 10 notable cases where a person was crucified.

Note: In April of 2019 the government of Saudi Arabia announced the execution of 37 suspected terrorists, one of those executions coming in the form of crucifixion!  Thus, it is logical to conclude that crucifixion is still a “modern” form of execution.  (Wow!) 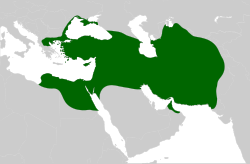 Also known as Inarus, this Egyptian was a rebel against the Persian occupiers.  Allying himself with the Athenians, the Persians eventually won and captured Inaros, executing him by crucifixion.  Records being what they were back then, historians debate whether Inaros was crucified or impaled.  Note: Inaros I lived 200 years earlier and was also a rebel, this time against the Assyrians.

An unidentified allied soldier said to be a Canadian, was allegedly crucified with bayonets against a barn door by German troops.  The story ran in British newspapers (then all over the world) and was used on American posters to sell war bonds, and an American propaganda film The Prussian Cur (1918).  Germany claimed the incident was false and just British propaganda.  British Parliament asked for an investigation as to whether this was common German practice.

According to Roman Catholic and Greek Orthodox martyrology, ten thousand Roman soldiers converted to Christianity were crucified on Mt. Ararat (the mountain where Noah is said to have landed his ark) in Armenia or Turkey by the Emperor Decius.

A martyred saint, Julia was also reputedly a virgin and a slave that was crucified for refusing to honor pagan gods and renounce Christianity. Despite the descriptive name, she was supposedly of Carthaginian origin. 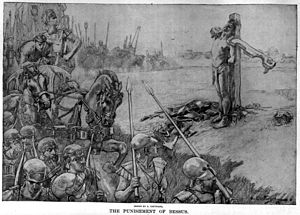 Bessus seized the throne of Persia after the defeat of Darius III by Alexander the Great.  Bessus led conspirators to kill Darius III and proclaimed himself King of Kings, and then attempted to mount resistance to the conquering Macedonians.  Fearful Persians soon caught Bessus and turned him over to Alexander who had him crucified.  As with some of the others allegedly crucified, historians disagree as to the exact method of execution.

After successfully converting perhaps 300,000 Japanese to Christianity, the Spanish and Portuguese missionaries were at odds and the Japanese authorities decided to stamp out Christianity. In that atmosphere, 26 Japanese Christians were crucified in Nagasaki, later declared martyrs by the Catholic Church. These were not the only Japanese Christians martyred, but they were the first and the most famous.

Known also by The Gladiator War or The War of Spartacus, this war was the rising up of the slaves against their Roman masters, led by Spartacus and other gladiators.  When the rebellion was finally crushed, Crassus captured 6000 remaining rebellious slaves and had them crucified, their bodies hanging on crosses along the road to Rome (the Appian Way).

Preaching his way from Jerusalem north to the Ukraine and Russia, Andrew ended up crucified in Greece at an unknown date.  The oldest accounts say he was crucified on the type of cross Christ was crucified on, but somewhere along the way tradition changed, claiming that he was crucified on an X shaped cross.  Apparently spreading the Christian word was a dangerous thing to do in those days, and fellow apostles Philip and Bartholomew found themselves crucified upside down in what is now Turkey.

The designated successor to Jesus as head of the new church, Peter was said to be crucified by Emperor Nero in Rome, upside down at his own insistence because he believed he was unworthy to be crucified like Jesus.

Of course, Jesus is by far the most famous victim of crucifixion, as millions of crosses (crucifixes) all over the world attest.  The story of his crucifixion, aside from being described in the Gospels, is told in “Passion Plays” performed each year all over the world and has been depicted in numerous movies, such as the Mel Gibson production starring Jim Caviezel, The Passion of the Christ (2004).  A rather irreverent spoof of the life and execution of Jesus was made by the Monty Python comedy troupe called The Life of Brian in 1979.

Question for students (and subscribers): Do you think crucifixion is a justifiable form of punishment?  Please let us know in the comments section below this article.

The featured image in this article, Crucifixion from the Buhl Altarpiece, a particularly large Gothicoil on panel painting from the 1490s, from © Ralph Hammann – Wikimedia Commons, is licensed under the Creative Commons Attribution-Share Alike 4.0 International license.  This object is classé Monument Historique in the base Palissy, database of the French furniture patrimony of the French ministry of culture, under the references PM68000036, IM68000035 and IM68000036.